His protest coincided with a meeting of Costco regional managers and there is no doubt they got our message when an Ads Aloft plane flew overhead at 2:00 P.M. towing a large banner calling for a boycott of Costco because they were supporting the cruel slaughter of seals in Canada by selling seal oil capsules in their store in Newfoundland.

Not only is this product illegal in the United States, it is being marketed as a health food supplement despite the fact that the product contains DDT, arsenic, PCB's, and mercury.

Selling poison in capsules made from the cruel massacre of harp seal pups is hardly a business ethic to be proud of.

Sea Shepherd has been getting a positive feedback from Costco members worldwide who are boycotting the big box store until they stop trading in cruelty and marine ecological destruction.

Read more about Costco's decision to sell a product derived from the annual Canadian seal slaughter. 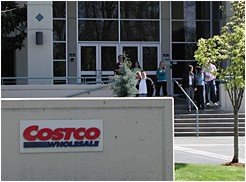 If you would like to let Costco know how you feel about the fact that they sell a product derived from dead baby seals:

Shareholders - Two contacts best used by anyone who holds shares in Costco or who is thinking about purchasing shares:

Canadian Senior Executives - Costco's top decision-makers in Canada (the ones who ultimately pushed to restock the shelves with seal oil caps):