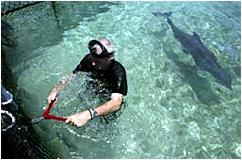 The world's most famous dolphin defender has struck again in his relentless crusade to protect and free dolphins.

In fact Ric O'Barry, Marine Mammal Specialist for One Voice France, can usually be found somewhere on the globe at any time defending dolphins.

This month he was in Haiti.

For the past few months, six dolphins and some sea turtles have been held in a small pen off Haiti's coast, all but forgotten during and in the wake of devastating climatic and political storms that have taken the lives of thousands of Haitians.

They were there because in the last days of the Jean-Bertrand Aristide government, a shady Haitian-Spanish consortium finagled a permit to capture ten dolphins for "tourist and educational" purposes. They captured eight, two died leaving six survivors.

O'Barry publicly denounced the capture as war profiteering accusing the consortium of taking advantage of the political strife in Haiti to circumvent Haitian law that prohibits the capture of dolphins.

O'Barry convinced Haitian Secretary of State Yves-Andre Wainwright to order the release of the dolphins and turtles. On June 3rd, with the assistance of the U.S. and Haitian Coast Guards, Ric cut through the chain link fence and freed the six dolphins and the turtles.

The capture and enslavement of dolphins is a worldwide problem fueled by the dolphinarium industry. The public only sees the dolphins doing tricks and being fed and apparently happy. What the public does not see is the cruelty and casualties suffered by dolphins at the hands of the profit-driven dolphin slavers.

Ric has spent over three decades protecting dolphins ever since he worked as Flipper's trainer for the once popular television series. Now having seen first hand the intelligence of these graceful creatures, he focuses on their freedom.