Documenting the Endangered Fish Killers off the Antarctic Coast

Documenting the Endangered Fish Killers off the Antarctic Coast 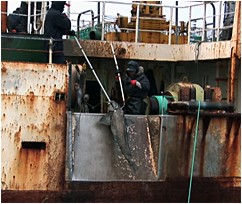 The waters off the coast of Australia's Antarctic Territory are described as an Australian Economic Exclusion Zone. This should translate into protection not just for whales but also for one of the most endangered fish in the ocean - the Patagonian and Antarctic Toothfish. (Dissostichus eleginoides)

Although the Sea Shepherd ship Steve Irwin is down in these waters pursuing the Japanese whaling fleet, we discovered today (February 23rd) two vessels engaged in deploying deep set longlines to exploit Toothfish.

At 0200 hours we encountered the Namibian registered longliner Antillas Reefer. At 0600 hours we found the Japanese harpoon vessel Yushin Maru No. 2 and we began our pursuit. We in turn found ourselves pursued by armed Japanese Coast Guard officers onboard the Japanese vessel Fukuyoshi Maru No. 68.

We lost the Yushin Maru No. 2 temporarily in a sudden snowstorm. When we emerged from the blizzard we discovered the South Korean registered Insung No. 2 engaged in hauling up Toothfish. We stopped to document the pulling in of the longline witnessing the taking of some century old large Toothfish.

We reported the taking of the fish to the Australian Customs vessel Oceanic Viking and we were shocked to hear the government spokesperson reply by saying, "at the end of the day there is not much that can be done, best to forget about it and let it go."

Toothfish long lining is a leading cause of albatross and other seabird morality in addition to threatening the fish itself with extinction. The Convention for the Conservation of Antarctic Marine Living Resources (CCAMLR) prohibits the setting of Toothfish longlines in daylight hours to prevent the incidental kill of albatross. We documented the Insung No. 2 pulling in their line in the middle of the afternoon.

This illegal fishery kills an estimated 68,000 Albatross, 11,000 giant petrels and over 150,000 smaller petrels each year. The video and photographs we took of the Toothfish fishery is unusual. These poachers are rarely seen and not often is there an opportunity to document their destructive activity.

The Steve Irwin spent only an hour documenting the Toothfish fishery before being forced to resume our pursuit of the Japanese whaling fleet.

No whales were killed today. I wish we could say the same for the Toothfish.