Ships manager Simon Ager stated, "The crew has done an amazing job getting the Brigitte Bardot ready for her next campaign in the South Pacific to protect threatened sharks from the shark fin trade. 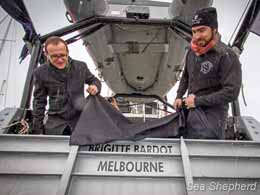 Deputy Green Leader Adam Brandt and Captain Locky Maclean unveil the Brigitte Bardot's new home location, Melbourne, Australia.
Photo: Simon AgerThe ship will dock at Sydney's iconic Circular Quay this weekend (June 8th-10th) to take on vital supplies before heading across the Coral Sea to seek out illegal shark finning operations. The support in Melbourne from the public and Melbourne on-shore volunteers has been outstanding and Seaworks here in Williamstown is such a great place to have Sea Shepherd vessels, from both an outreach and maintenance standpoint."

"Thank you to deputy greens leader and Melbourne MP Adam Bandt for coming down to the ship today, despite the rain and wishing the crew of the Brigitte Bardot well on the upcoming shark fin campaign and supporting our founder Captain Paul Watson, who remains under house arrest in Germany", said Captain Lock MacLean.

Australian Director Jeff Hansen stated, "Its been encouraging to see the letters of support Senator Bob Brown and Australian Greens Leader Senator Christine Milne have written to the German Ministers, showing that they too are committed to seeing the release of Captain Paul Watson from house arrest in Germany."

"Sharks play a vital role in the health of our life supporting oceans and their numbers are being decimated worldwide due to the unquenchable and catastrophic demand for shark fin soup.  Even here in the magnificent world heritage area of the Great Barrier Reef marine park, a shark fishing industry continues. It’s a wonderful sight to see an Australian registered vessel doing such vital work for the world’s sharks and oceans for the benefit of future generations. - Stated Mr. Hansen"