DeBeers Pledges Support for the Seals

DeBeers Pledges Support for the Seals

Thanks to the efforts of Francois Hugo and Seal Alert in South Africa, the DeBeers Diamond Corporation has stated that they oppose the killing of the South African fur seals in Namibia and they will help to convince the government of Namibia to end sealing.

Francois responded immediately to Stephen Lussier of DeBeers saying, "Thank you as a leading mining company both internationally, here in South Africa and Namibia, for taking such a positive stand against seal culling. I will immediately forward this view to all seal supporters, including the media. You have my undying gratitude for taking this stand."

The fight to end the slaughter in Namibia continues. The support of the De Beers Corporation is a tremendous boost to this effort. Captain Paul Watson has sent off a letter to Mr. Stephen Lussier expressing the gratitude of the Sea Shepherd Conservation Society for taking a stand on this issue:

Word has just reached me here in the enchanted islands of the Galapagos on the far side of the world from you, about the position your company has taken in opposition to the slaughter of South African Fur Seals.

On behalf of our international membership I would like to thank-you and the DeBeers Corporation for your commitment to corporate responsibility with regard to the conservation of nature and the environment.

This slaughter of seals in Namibia brings shame to Southern Africa and Sea Shepherd has been for many years supportive of Francois Hugo and Seal Alert for the incredible effort to bring this issue to international public attention and for his efforts to abolish the killing.

Mr. Hugo has gained a reputation world-wide for his commitment to these seals. The support of your company for his efforts is heartening and is a boost to the morale of all of us who would like to see these incredible marine mammals protected and their security secured for future generations.

Copy of De Beers' letter (click for a larger view): 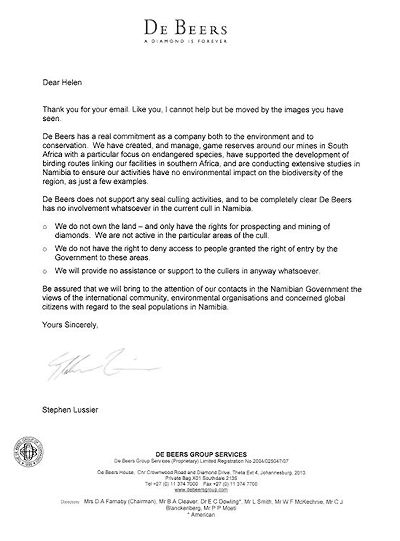