Death Trawler On its Way Down Under

FV Margiris, is currently sitting off the east coast of Africa and will depart for Devenport, Tasmania where it intends to fish 17,500 tonnes annually of jack mackerel, blue mackerel and redbait. The Margiris is 142 metres in length and weighs 9,600 tonnes and it has the capacity to process, freeze and carry 6,200 metric tonnes of fish before off loading. European ships like this 142-metre super trawler can haul such huge quantities of fish that they can no longer fish in European waters and to cover the cost of these super trawlers they desperately seek new fishing grounds to plunder.

The super trawler and her sister ships have already contributed to the overexploitation of fish stocks in West Africa and the South Pacific. The South Pacific jack mackerel fishery, a favourite of this super trawler and the European Pelagic Freezer-Trawler Association (PFA), made headlines this year when fish populations plummeted by ninety percent. Off West Africa almost all the PFA's target species are now fully exploited or overexploited, prompting the Senegalese government to expel all PFA vessels from their waters.

The vessel is not yet registered to operate in Australia and does not currently have a permit. Seafish Tasmania Director Gerry Geen, expects that process to be completed in August. "Seafish Tasmania has been allocated a quota of 18,000 tonnes annually by the Australian Fisheries Management Authority. We will employ the Margiris, a freezer vessel, to fish in Commonwealth Waters outside the three-mile State limits. The super trawler will be based in Devonport because it lies in the middle of the fishery which stretches from Western Australia to Queensland," he said. "The fish we catch will be cold-stored in Devonport and then transported and sold to African and Asian countries." 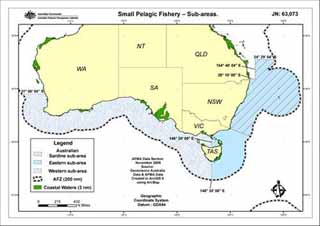 Small Pelagic Fishery Map - the area of the propsed operation of the super trawler Margiris. Photo: Australian Fisheries Managment Authority (click to view a larger version)It is ironic that after the Margiris and other members of the PFA were expelled from West African waters that they will now harvest small pelagic fish from Australian waters to feed those whose fisheries have been destroyed by them. Care2 reports, “It takes 56 traditional Mauritanian boats one year to catch the volume of fish that an EU vessel can capture and process in a single day” [3]. That's 56 boats' worth of crews' yearly salary destroyed by over-exploitation of one day by foreign super trawlers.

“Senegal’s only resource is the sea. One in five people work in the industry but if you put those people out of work then you can imagine what will happen. Senegal could become like Somalia,” Abdou Karim Sall, president of the Fishermen’s Association of Joal and the Committee of Marine Reserves in West Africa told The Guardian.

With its record of destruction it is not surprising that Australian conservation groups, recreational and professional fisherman are all opposed to arrival of the super trawler.

The company bringing this super trawler to Australia thinks that marine species exist purely for the purpose of making profits. That's why these obscene floating factories exist - to empty the oceans in the shortest possible time and maximise the return on capital to their owners. Australian authorities should head them off before the ship ever arrives in our territorial waters, as once the damage is done, it almost certainly can't be reversed.

At a time when the Australian government is talking up taking action against over-fishing globally, it would be hypocritical to allow such a destructive force against nature to operate in Australian waters.

If this super trawler is allowed to operate in Australia, it would mean huge impacts on the already critically endangered Southern Bluefin Tuna and albatross, and the tragic death of seals and dolphins through being trapped and drowned in this super trawler’s indiscriminate killing nets of death as “by-catch”.

If overfishing does not stop, the world’s fisheries will completely collapse by 2048. The reality is that the oceans that provide up to eighty percent of our oxygen are in deep trouble and allowing this super trawler to operate in Australia’s waters would be a further sealing of humanities fate.

Sea Shepherd are calling on all our supporters to please for our oceans sake and our children’s sake, please assist Sea Shepherd in stopping this super trawler. 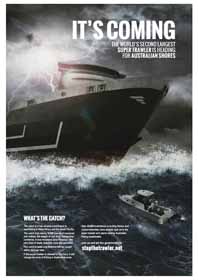 Newspaper advertisement opposing the Trawler. Photo: Stopthetrawler.netHere is what you can do to help:

1. Click here for more information and to sign the petition, and ask 5 of your friends to do the same and share on your social media sites.
2. Contact Environment Minister Tony Burke and Prime Minister Julia Gillard to express your concerns.
3. Write letters to the editor: The Mercury, The Examiner, The Advocate
4. Get involved with the Australian national day of action to stop the Trawler on Saturday 11th August.

The National Day of Action aims to demonstrate to state and federal politicians the breadth and depth of opposition to the super trawler right around Australia. Here is what you can do:

1. Create a banner with "Protect our Marine Life – Stop the Super Trawler," or print out the following ad from Environment Tasmania.

2. Choose a local landmark or your local state or federal MP’s office: Pictures of banners with landmarks or local politicians’ offices will help to make the issue relevant to your area and show your elected representatives that people in their electorates oppose the super trawler.

3. Organize friends, colleagues and family to join you for the action and photo shoot

4. Call your local newspaper and ask them to cover your action as part of the National Day of Action

5. Take a photo of your groups action and email your pictures to stopthetrawler@et.org.au and Australia@seashepherd.org for posting on our social media networks.