Death in the Ferocious Isles: Sea Shepherd under Escort by the Danish Navy

They do eat some whale meat but the flesh is so contaminated with mercury that Faeroese children have higher levels of mercury in their bodies than any other people on the planet. But the majority of the whales are killed and dumped at sea, and Sea Shepherd was able to secure evidence of this waste.

The images are nightmarish with fetuses torn from the bodies of mothers, and bodies mutilated with clubs, knives and spears as the islanders drive the defenseless whales up onto rocky beaches killing every one, wiping out entire pods. 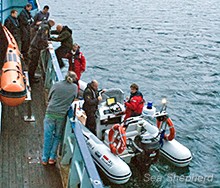 In Taiji, experienced fishermen do the killing, but in the Faeroes, even the children are encouraged by men to spear and stab the whales to death; many of these men are drunk and laughing, in what they consider to be a traditional festival of slaughter.

The killing is a violation of the Berne Convention of which Denmark is a signatory, but Denmark claims that the Faeroese are not subject to the law as a protectorate despite receiving all benefits from the European Community.

Sea Shepherd, in partnership with the Brigitte Bardot Foundation, worked earlier this summer with an on-the-ground undercover operative and continues to work at sea onboard the Golfo Azzurro to expose the slaughter and investigate ways to defend the pilot whales from the vicious and lethal assaults by the Faeroese.

Yesterday the Golfo Azzurro’s cover was compromised, and the ship was boarded and searched by police. The vessel was released because no laws had been broken, and it is presently being escorted by the Danish Navy.

Sea Shepherd crew members are continuing their patrol, but this time under the watchful eyes and guns of the Danish Navy.