Dancing with Death Machines at the Bottom of the World

“We’ve got them before they were able to kill a single whale. They are not whaling today and our challenge now is to make sure they don’t kill any whales in the coming days,” said Sea Shepherd campaign leader Captain Paul Watson.

This year Sea Shepherd has the capability of keeping one of their ships on the whaling fleet for the duration of the Japanese whaling season that usually ends in middle to late March. “Our objective is to save the maximum number of whales and to maximize the financial losses of the whalers at the same time.” Captain Watson said in a statement from the Southern Ocean. 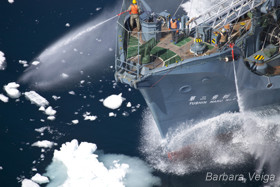 The crew of Yushin Maru No 2 readies their water cannons to engage with Sea ShepherdClashes between the whalers and the anti-whalers today involved several high-speed chases and near collisions as the ships dodged huge bobbing boulders of hardened blue ice and scattered thick and jagged ice floes. The whalers turned their high-powered water cannons and hoses on Sea Shepherd’s crew, while Sea Shepherd responded with some rather unpleasant foul-smelling substances. There were no injuries.

“We now have a zero kill,” said Captain of the Bob Barker Alex Cornelissen of the Netherlands. We intend to do everything we can with the resources available to us to make sure that the kill remains at zero. We need to, and we shall keep them running.”

Sea Shepherd’s ships found the Japanese whaling fleet in remote waters some 1,700 nautical miles southeast of New Zealand on December 31, 2010. The Japanese fleet had just arrived from Japan and had not begun their killing operations when the Sea Shepherd fleet intercepted them.