Sea Shepherd Conservation Society applauds the efforts of Animal Friends Croatia for the announcement that the Ministry of Culture for Croatia has joined Mexico, the United States, Greenland, the Netherlands, Belgium, Germany, the United Kingdom, and Luxembourg, which have banned or are in a process of introducing a ban on import of pelts and other products derived from seals. 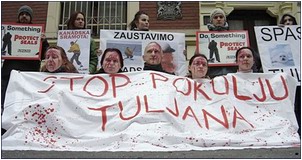 March 15, 2006: Zagreb - citizens protest against the slaughter of seals in Canada

While the world is fighting a battle for seals in Canada

At the height of protests on six continents and with the opposition of the whole world, while Paul McCartney and Brigitte Bardot are repeatedly appealing to the Canadian Government to stop the slaughter of seal pups and the world renown musician Morrissey cancels his Canadian tour in protest against this crime, Croatian Nature Protection Division - Biodiversity and Landscape Conservation Department with the Ministry of Culture bans the import of seal pelts and other products derived from seals!

According to the Directive of the Council of Europe No. 83/129/EEC of March 28, 1983 about the import of pelts and products derived from some newborn seals in member states (SL L 091 09.04.1983 page 30), Article 20 of the Rule Book of Transboundary Transport and Trade of Protected Species which is being implemented by the Nature Protection Law (Article 101, item 6) and which came into force by being published in Official Gazette No. 34/2006 on March 27, 2006, Croatia banned the commercial import of skin and other products derived from skin and seals from Appendix X! In this case, the word is about the Cystophora cristata - hooded seals and Phoca groenlandica - harp seals, the very species of seals that are now commercially being hunted on the east coast of Canada!

‘By taking this extremely important step, Croatia contributed a lot to endeavours of the Coalition to Protect Seals which at the moment has 47 member organizations from all over the world, but also to more than 70% of world and Canadian public which is opposing to this pointless and shameless slaughter', says Luka Oman, chairman of Animal Friends Croatia. 'We would like that the Ministry of Agriculture, Forestry and Water Management of Croatia follows the bright example of the Ministry of Culture and implements the ban on breeding animals for fur in Croatia in their Animal Protection Bill Proposal. '