Criminals Plan to Slaughter 60 whales off the Coast of Japan

Criminals Plan to Slaughter 60 whales off the Coast of Japan

The Yakuza controlled Japanese whaling industry have unleashed their mad dog killers into the waters off their own Northeastern coast to viciously slaughter 60 piked (Minke) whales.

The proposed slaughter will be illegal and the killing is not endorsed or sanctioned by the International Whaling Commission.

Once again Japan is justifying the slaughter under the absurd excuse of "research."

The whalers are trying to compensate for losses caused by Sea Shepherd interventions in the Southern Ocean in December 2008 and January and February 2009. The Japanese Fisheries Agency reported to the media that the environmentalist group Sea Shepherd made it impossible for the whaling vessels to operate on 16 days of the 100-day whale hunt.

The six ships caught 679 Minke and one fin whale on the mission, the agency said.  These numbers were well below the planned haul of between 765 and 935 of the giant mammals.

The whalers need to kill at least 765 whales to break even. As a result they suffered losses of tens of millions of dollars.

The Sea Shepherd ship Steve Irwin and her crew chased and shut down the whaling operations for more than five weeks. Japan claims 16 days but that would mean that they would have fallen only 128 whales short of their set quota based on an average kill of 8 whales per day. The whalers failed to reach their set quota by 305 which means that Sea Shepherd prevented whaling activities for 38 days which validates the Sea Shepherd claim that whaling was shut down for five and a half weeks - not 16 days as Japan claims.

Four whaling ships and one designated "research" vessel will set sail soon from Ayukawa port in northern Miyagi prefecture and hunt whales within 80 kilometers (50 miles) off the coast until late May, the official said.

Japan wants to launch the new whaling mission ahead of the International Whaling Commission's annual general meeting in June in Madeira, Portugal. The IWC will not have an opportunity to censure these illegal whaling activities until after the whales are killed. Japan is gambling that the member nations will do little more than make a noisy fuss about the violations of IWC regulations. The Japanese have learned that the IWC is just a paper shark, all talk and no action. 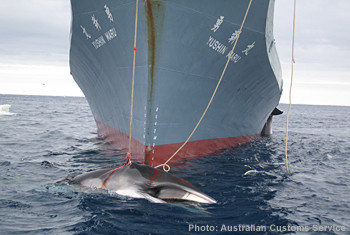