The Farley Mowat is under attack.

11 crewmembers have been arrested by the Mounted Police for taking pictures of sealers. They were arrested after 8 sealers physically assaulted 7 Sea Shepherd crewmembers on the ice with hak-a-piks and clubs.

The sealers were from the sealing ship the Brady Mariner out of Newfoundland.

The Canadian Coast Guard ship on the scene is the Amundsen.

The 11 Crew In Custody are:

Lisa Moises and Ian Robichaud barely made it back to the Farley Mowat. They watched as the massive red hull of the Coast Guard Icebreaker Amundsen bore quickly down on them in an attempt to cut them off. They could see chunks of ice flying out from the bow of the ice breaker but they kept focused on the Farley Mowat and managed to make it across.    Behind them Jonny Vasic and Jon Batchelor raced to cross the ice before the Amundsen could cut them off. Jonny saw the hull looming above him and felt the ice tremble as a jagged cut slithered before the bow and opened up. He could see the dark black water widening as he jumped and made it across, relieved to see that Jon Batchelor had done the same. Both of them raced towards the Farley Mowat. Behind them Alex Cornelissen and Lisa Shalom were not so lucky. They were cut off and unable to cross the treacherous lead that the Amundsen had opened up.   They saw helicopters approaching and police officers debarking the Ice breaker, their hands on their guns approaching them. 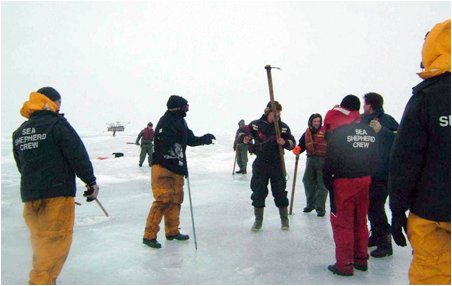