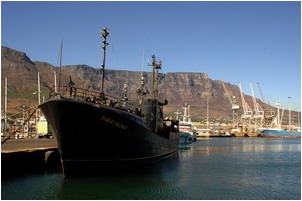 Captain Paul Watson learned many years ago from his Aikido teacher that when confronted with a negative situation, the best tactics is to take positive advantage of the situation. The object being to turn an attack into a counter attack and to turn a disadvantage into an advantage.

And so, our return from the whale killing grounds was greeted with controversy, and as Sea Shepherd is no stranger to controversy, the Captain and crew felt quite at home with the expected harassment. We certainly are aware that the Japanese whalers have friends in high places and pull strings in ports around the world including Cape Town.

The ship was boarded and detained on the morning of January 25th. Interestingly, the detainment order was actually issued on January 24th, before the Farley Mowat even reached the entrance to the harbor.

Captain Saleem Modak led the charge of the bureaucrats under the flag of the South African Maritime Safety Authority (SAMSA). Into the valley of red tape he charged, confident in his ability to exaggerate the trivial.

Despite the fact that the Farley Mowat carries a certificate of Canadian registry as a yacht, Captain Modak declared that the ship was a commercial cargo vessel. He said the ship was too large to be a yacht and he sarcastically joked that a yacht was white with wealthy people sitting on the deck with drinks. Apparently, there is no place in post apartheid South Africa for all black yachts.

Not only did he order the ship detained with all costs for the detention to be billed to Sea Shepherd, he also ordered Sea Shepherd to hire two independent security guards to watch the ship 24 hours a day.

Sea Shepherd appealed to the media to expose this obvious harassment and the resulting publicity was positive to Sea Shepherd and embarrassing to SAMSA.

In the meantime, Sea Shepherd's South African representative Dr. Herbert Henrich located an excellent ship's agent - Gerald Hagemann. Francois Hugo of Seal Alert-SA contacted Gary Pienaar, who holds the office of Public Protector. Mr. Pienaar approached SAMSA with our complaint that the dock where the ship was being held had no toilet, laundry, garbage, or shower facilities. He was able to arrange with our agent Mr. Hagemaan to move the ship to M Berth beside the Royal Cape Town Yacht Club. Unfortunately, the new berth did not allow for public access. Mr. Hagemann, a member of the yacht Club was also able to get permission for the crew of the Farley Mowat to use the facilities at the yacht club.

The decision was made to legally challenge SAMSA and to seek damages for costs that SAMSA forced Sea Shepherd to undertake.

On February 1st, the two Greenpeace ships Esperanza and Arctic Sunrise returned to Cape Town. Despite being registered as Dutch yachts and larger than the size of the Farley Mowat, both vessels were unchallenged by Captain Modak. They did not require a security clearance and were allowed to berth at the public access waterfront area.

Despite being prevented from reaching the public, many people of Cape Town have been very supportive and have come to the gate where the ship is berthed.

A profile of Captain Paul Watson was published in the Cape Times. Two palettes of food and coupons were donated by the Pick and Pay chain and Fry's of Durban contributed a large donation of vegan food.

Overall it has been a good first week in Cape Town. We've made more friends than enemies, stirred up a bit of controversy, and had people all over the country talking about illegal Japanese whaling.

The Farley Mowat will now be prepared for campaigns to oppose poachers off the coast of Africa.

Captain Paul Watson will be concentrating on the effort to raise funds to secure a faster ship to return in December 2005 to once again intercept the Japanese whaling fleet. Some volunteer crew are departing the ship, some new people are joining and some veteran crew are staying on.

Our Appreciation to Supporters in South Africa

Our problems with the bureaucrats would be much more difficult to confront if it were not for the fact that we have a good support base in South Africa.

Our Sea Shepherd representative in Cape Town and longtime Advisory Board member Dr. Herbert Henrich was instrumental in making the contacts we needed to berth in the port. He also advanced us the funds to cover the agency fees. A thank-you also to his wife Agneta and his daughter Jessica.

Willie Jacobz the Vice-President of Goldfields  and the father of Sea Shepherd crewmember Wessel Jacobz was very helpful in making contacts with the media and government on our behalf.

Gerald Hagemann connected us with the Royal Cape Town Yacht Club which has provided facilities for our crew.

Chris Brown, the Canadian Consulate for Cape Town, was very helpful in assisting with communications with the Canadian government.

Thanks also to Ken Boates of Whale Mark for his assistance and support.

Crew support from Fry's of Durban, the Pick and Pay stores and from numerous members of the public is much appreciated.