Cowardly Whalers Running Scared Out of the Whale Sanctuary

Cowardly Whalers Running Scared Out of the Whale Sanctuary

The Japanese whaling fleet is running scared with both the Greenpeace ship Esperanza and the Sea Shepherd ship Steve Irwin on their tail. 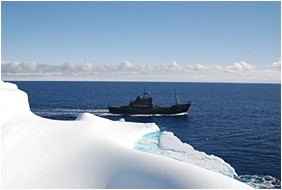 The Japanese factory ship the Nisshin Maru is heading Northwest around 58 Degrees South and 67 Degrees East about 360 miles southwest of Heard Island. The harpoon vessels are scattered with only one, the Yushin Maru in close proximity to the Nisshin Maru.

The whaling fleet is running and has covered over 400 miles in the last 36 hours. They are heading out of the Whale Sanctuary hoping to shake their pursuers in heavier weather.

"I have no doubt about who they are running from," said Captain Paul Watson onboard the Steve Irwin. They know we're not trying to catch them to take their picture."

The Esperanza has the Nisshin Maru in sight. The Steve Irwin is in full pursuit and gaining on the position of the Esperanza and the Japanese factory ship.

"These cowards come down here and slaughter defenseless innocent whales but they run scared at the first hint of retaliation. So much for the samurai spirit, these craven whalers are an embarrassment to their nation," said Captain Watson.

"As long as the Japanese whalers are running, they will not be killing whales. If they stop to kill whales, we will catch up with them," said Steve Irwin's 2nd Officer Peter Hammarstedt of Sweden. "And when we do catch them, we won't be sitting down to tea with them - we intend to make this a season for them to remember."

The Steve Irwin with a crew of 34 has fuel resources to pursue the Japanese whalers for another 30 days.