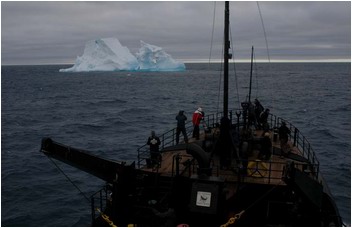 The Japanese whaling fleet is on the run. The entire fleet is heading northeast out of the whaling area at 14 knots.

The Sea Shepherd ship Farley Mowat is in pursuit, and was heading towards the area where the whalers were operating when they turned and fled northward.

Two Greenpeace ships the Esperanza and the Arctic Sunrise are also in pursuit. The Esperanza is able to keep up with the fleet and the Arctic Sunrise is falling behind. The position of the Japanese fleet at 2000 Hours on December 23rd was 62 Degrees 35 minutes South and 143 Degrees and 34 minutes East. This put the fleet more than 200 miles north of the position where they were discovered whaling on the 21st of December.

The Japanese have not been whaling today. They are running.

With clearance from the Australian government, one of the Japanese ships was approaching the port in Hobart, Tasmania, to drop off a whaler suffering from appendicitis and refuel. However, the sick man was extracted from the ship by a rescue helicopter. The Australian government has now avoided the embarrassment of having a Japanese whaling ship in an Australian port while their fleet is illegally whaling in Australia's own portion of the Antarctic Territory.

Captain Paul Watson believes that the Australian government has decided to support illegal Japanese whaling indirectly by doing absolutely nothing to oppose their illegal activities. "By being willing to open up an Australian port to a Japanese whaler to refuel, they have sent a signal of acceptance of the Japanese exploitation of whales in the Australian Antarctic Territory," said Captain Watson. "Imagine the port of Hobart being used by a Japanese submarine in World War II for refueling. Japan does not recognize the Australian claim to the Antarctic territory but then again, Japan did not recognize Australian sovereignty at all sixty years ago."

"Now the Australian government is claiming that the Greenpeace protest is counterproductive," continued Captain Watson. "The fact is that it was the Japanese ship that closed in on the Greenpeace vessel yet Environment Minister Ian Campbell scolded Greenpeace for not respecting the rules of the road. It appears that the Japanese can do no wrong in the eyes of the Australian government. Maybe now the question should be asked: "What really is going on here Mr. Campbell? Are you representing the people of Australia or the corporations
of Japan?"

Perhaps it is time once again to remind the Australian government of the crimes being committed by Japan:

1. The Japanese are whaling in violation of the International Whaling Commission's global moratorium on commercial whaling. The IWC scientific committee does not recognize this bogus research that the Japanese are using as an excuse.

2. The Japanese are killing whales in the Southern Ocean Whale Sanctuary.

3. The Japanese are killing whales unlawfully in the Australian Antarctic Territory.

4. The Japanese are targeting fin whales this year and humpback whales next year. These are endangered species, and thus, this is a violation of CITES, the Convention on the International Trade in Endangered Species of Wild Flora and Fauna.

Six blatant violations of international conservation law and all the Australian government can do is to scold Greenpeace for being the victims of aggressive attacks by the Japanese whalers.

"Australia may not be Denmark, but something is clearly rotten in Canberra over this issue. What really is going on here Mr. Howard?," asks Captain Paul Watson.