Costco goes Political and Endorses the Slaughter of Baby Seals

Costco goes Political and Endorses the Slaughter of Baby Seals

Last month, Costco was saying they did not get involved in politics. Yeah, right!  They claimed that they were selling baby seal oil capsules containing toxic substances like DDT, PCB's, arsenic and mercury because that is what their customers demanded. Yeah, right!

Alan Doyle of Great Big Sea recently blasted Pamela Anderson for opposing the slaughter of seals by Newfoundlanders. He weighed in to attack Sir Paul McCartney when the former Beatle spoke out against the cruel slaughter of seal pups.

This is a quote from Alan Doyle of Great Big Sea on the Band's website:

But Paul is a smart, worldly man who is well versed in Newfoundland and Labrador history and economics, right? I am sure Mr. McCartney has considered all the above before he agreed to this photo opportunity today, right? If so, lets call this what it is. Mr. McCartney has thought it through and chosen seals over sealers, regardless of whether these sealers are humane and responsible. He is voting for fundraising for the Humane Society over the continued existence of Coastal Communities of Newfoundland and Labrador.

Well, Mr. and Ms. McCartney, enjoy your trip to Atlantic Canada. If your efforts today are really successful, there may be a few less towns to see next time you stop by.

To the Canadian media, Doyle said the McCartney photo op on the ice is misleading to the public and unfair to sealers.

"There has not been a cute and cuddly baby seal hunt in a long, long time," Doyle said, pointing out that Canada has banned the killing of newborn, whitecoat pups.

"Older harp seals are what the sealers are after, but I'll bet these much uglier dudes won't make the final photo." 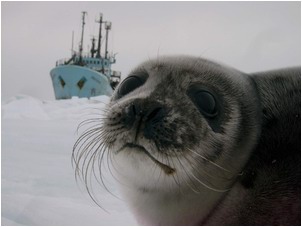 Here is one of the "uglier dudes" that Doyle and Costco like to see killed.

Captain Paul Watson has an answer for Doyle: "The problem is Doyle, that it is illegal to pose with the seals being killed. And a baby seal is a baby seal. My crew has posed with month-old seals many times and they are just as cute. The problem here is that Great Big Sea is a band with a limited audience, primarily in Newfoundland, so it is understandable why you would support the sealers. Paul McCartney is a musician who appeals to the rest of the world where killing seals is obscene and considered cruel and barbaric. That is why Paul McCartney is a household name and Alan Doyle is not. I happen to like the music of Great Big Sea myself but, then again, I'm from Atlantic Canada. Oh and tough break at the Juno's, dude. I'm sure Pam was thrilled you didn't win anything."

I became aware in the hours between the song circle and the Juno telecast that the Juno host had plans to hijack Canada's music celebration and use it to forward her own chosen agenda of the week. The press was completely aware of this and would no doubt be gunning for my head for a comment on the whole thing. Great. As if it wasn't going to be a big enough drag to walk the red carpet and try not to trip and stumble, while explaining that we lost our umpteenth Juno in a row. Now I'd have to dodge questions about the host's plan to turn the much needed press attention away from Canadian Music and onto her own feeble attempts to seem worldly. Just Great. Thanks a bunch, Pam. Really, really glad they picked you, with your endless knowledge of Canadian Music, to host the Juno's.

I got through the interviews without saying anything too rude and tried my best to deflect all questions back to reason we were all here. Likewise, I stuck to the script at the awards presentation. I could hardly criticize the host for not fully sticking to the music celebration, if I did not do just that. In any case, she turned out to be the laughing stock of the international media and, if anything, cast a poor light of the cause she chose to represent. Towards the end of the show I was actually starting to feel bad for her as the boo's every time she walked out are tough to hear for any performer. Those responsible for hiring her have been criticized and embarrassed every moment since the show started last Sunday night.

So, Costco is anti-Pamela Anderson, anti-Paul McCartney, anti-seal, anti-Sea Shepherd and pro-cruelty and pro any group that supports the slaughter of seals.

Way to go Costco. It is amazing how Costco is so in touch with the concerns and sensitivities of Americans. For the sake of their few stores in Newfoundland they have tarnished their reputation in the rest of the world where the mass slaughter of seals is considered an abomination and an obscenity.

Baby seal oil capsules are obscene. And we must ask: How can a product that contains PCB's, DDT, arsenic, and mercury be marketed as a health food supplement?

Costco boasts that they give customers what they want. Yeah, right. How many Costco customers outside of Newfoundland really want Costco to be selling oil obtained from the tortured and mutilated corpses of over 350,000 seals pups slaughtered every year before the eyes of their mothers?

Has Costco no shame?

If you would like to let Costco know how you feel about the fact that they sell a product derived from dead baby seals:

Shareholders - Two contacts best used by anyone who holds shares in Costco or who is thinking about purchasing shares:

Canadian Senior Executives - Costco's top decision-makers in Canada (the ones who ultimately pushed to restock the shelves with seal oil caps):