Accompanied by various organizations, biologists and conservationists, the Costa Rican Defender of the Citizens, or Ombudsman, decided to personally look into the shark-finning issue, and decided to visit the private docks of Puntarenas, Costa Rica's largest Pacific port. What he found, took him straight to the heart of the shark-finning issue, as private dock owners denied him access at three of the four docks visited.

Hundreds of foreign shark fishing vessels land hundreds of tons of shark fins at the privately owned docks in Puntarenas. Due to the private nature of these docks, owners have the right to protect their privacy and deny access to anyone, even government officials.

"Under these circumstances, it is impossible to protect the public interest," explained Randall Arauz, President of Programa Restauración Tortugas Marinas (PRETOMA) "That is precisely why Costa Rica's Customs Law, Article 212, mandates that only public docks, or duly authorized private docks, can be used for the landing of fishery products from international vessels. Yet currently not one single private dock has obtained the necessary authorization from Customs."

"Sadly, Customs has decided to ignore its own law," says Jorge Ballestero of PRETOMA. "Foreign vessels are allowed to land shark products illegally at the private docks, and by doing so, shark-finning is facilitated."

"Shark-finning is a wasteful, unsustainable practice, but that's what these foreign vessels are here for," states Arauz. "Shark fins are by far the most profitable product they can land, at US$60-100 per kilo, and these vessels are landing tens of tons of fins at a time."

Allowing foreign vessels to land at private docks is just as illegal as allowing someone to set up an international airport on his private ranch where the ranch owner would be able to deny a government official access to inspecting the cargo of the plane.

"The solution to this problem is simple; abide by Costa Rican law," says Noah Anderson, of PRETOMA. "When it comes to shark-finning, the problem is the private docks, and until the illegal activity there is stopped, the world will continue to view Costa Rica as a country that says it supports conservation, but whose actions promote shark-finning."

The Sea Shepherd Conservation Society is very familiar with the corruption in Costa Rica. In 2002, when Captain Paul and the crew of the Ocean Warrior intercepted an illegal longliner, the fishermen bribed the judges to have charges laid against Captain Watson.

Despite the fact that the Sea Shepherd encounter was video-taped with three cameras and despite the fact that there were forty witnesses including independent media, the Punteranas Court charged Captain Watson with attempted murder on the word of six illegal fishermen. None of the fishermen were injured nor did they have any evidence. Their claim that Captain Watson tried to kill them was sufficient to convince the courts to lay charges. The charges were dropped when the Court interviewed Captain Watson and watched the videos.

Captain Watson had already left the country so this move was simply a strategy to keep him from returning to assist the rangers at Cocos Island to stop poaching activities.

"Corruption is rampant in Central and South America," said Captain Watson. "This comes as no surprise to anyone. What is a surprise is that Costa Rica is one of the most corrupt countries in Central America. They have had good public relations, but the truth is that Taiwan fishing companies call the shots in Puntarenas, and what the shark fishermen want the shark fishermen get." 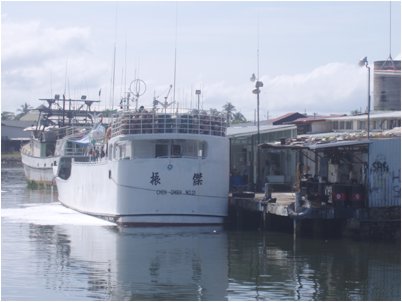 A foreign vessel at a private dock in Puntarenas
Tweet