Congratulations to Randall Arauz, the President of Pretoma (Progama Restauración de Tortugas Marianas) for winning the 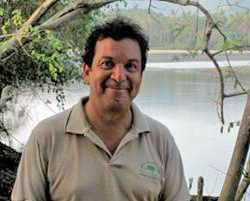 The award recognizes his tireless work to draw international attention to the inhumane and environmentally catastrophic shark finning industry, and his unrelenting campaign to halt the practice in Costa Rica.

"Shark finning is not only cruel, it is irresponsible and unsustainable fishing at its highest degree," said Arauz during the filming of the award video detailing his work. "In spite of this, it has been close to impossible to attain any international binding management and conservation measures to curtail this practice."

The Sea Shepherd Conservation Society is proud to have worked with Randall Arauz in opposing Shark finning in Costa Rica.

“Randall Arauz deserves this recognition for the years of hard work he has devoted to sea turtles and sharks in Costa Rican waters,”  said Captain Paul Watson.