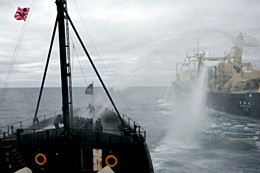 The Nisshin Maru is blasting the crew on the Steve Irwin with high pressure water hoses and LRAD sonic weapons. The harpoon vessels are passing closer and closer before the bow of the Steve Irwin to block the Sea Shepherd ship from interfering with their whaling operations.

The crew are a little dazed and dizzy from the LRAD's and many of them have been drenched with freezing water.

"Saving whales is not easy," said Laura Dakin from Canberra. "I wish we had better equipment and that we could go fast enough to block the harpoon vessels. For now all we can do is disrupt their transfer operations."

Three whales have been killed so far today. The Japanese whalers have decided to up the ante knowing that their government will support any violence they undertake against conservation efforts.

"If the anti-whaling nations had the same resolve and determination to stop whaling that Japan has for slaughtering them, we could end their obscenity," said Captain Paul Watson. "These whales are dying because of the passive complacency of Australia, New Zealand, the USA and the other so called anti-whaling members of the International Whaling Commission."