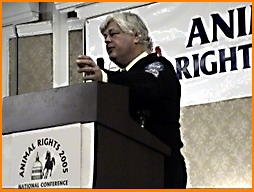 Captain Paul Watson, founder of Sea Shepherd Conservation Society, will embark on a public lecture tour across Canada from September 12th through 19th.  Hosted by local animal rights and environmental organizations, he will be discussing why the oceans are dying, the major threats facing marine wildlife, and how we can all make the difference between extinction and survival.  He will devote a fair amount of time discussing the annual Canadian seal slaughter, what Sea Shepherd and other organizations are doing to stop it, and what you can do to help.

Please see the following list for locations and dates. We hope to see you there!

As one of the founders of the Greenpeace Foundation in 1972, and the leader of the very first campaigns to save whales and seals, Paul Watson pioneered environmental direct action by utilizing inflatables in marine conservation and leading the very first campaigns to protect baby harp seals.  By bringing Brigitte Bardot to the ice in 1977, he initiated the tumultuous affair between the media and the environmental movement which still exists today.  He left Greenpeace and continued his legacy by founding the Sea Shepherd Conservation Society where he has continued his work protecting whales dolphins, seals and the other creatures of the sea by direct actions against pirate whalers, driftnetters, shark finners and illegal fishing operations.

Through his frank and riveting presentations of his many global crusades to protect the world's whales, from extinction against enormous well financed criminal operations, Paul discloses a world where few have ventured.  As one of the pioneers of the modern environmental movement and through his own experience he offers practical conservation applications to some of the world's most massive and destructive problems.

"Captain Paul Watson is an eco-renaissance warrior. A passionate speaker, skilled master mariner, talented writer, and a fearless conservationist; a combination of virtues that make him the Captain Nemo for our times."