On March 6th, 2007, the City of Casey in the State of Victoria in Australia passed a motion by the Casey City Counsel to name Tooradin as the Honorary Homeport for the Sea Shepherd ship Robert Hunter. The vote was 10 for the motion and 1 vote against. 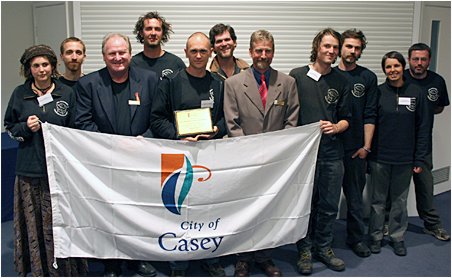 The City of Casey will arrange a civic reception for the crews of the Robert Hunter and the Farley Mowat in April.

The Motion was sponsored by: Councillor Michael Farley
City of Casey Councillor 2005 - present

Copy of the Motion

I hereby give notice that at the Council Meeting on 6 March 2007 I intend to move a motion as follows:

1. That the City of Casey become a friendship city to the Sea Shepherd Conservation Society and to its ship the "Robert Hunter".

2. That Tooradin becomes an honorary home port to the "Robert Hunter".

4. That, in recognition of the voluntary nature of the Sea Shepherd Conservation Society and in respect of the ethics of the organisation, the City of Casey provides transportation to and from the event for our guests from Sea Shepherd and vegan catering for the function.

Casey is the second City to honor Sea Shepherd Conservation Society. In June, Mayor Peter Tagliaferri of Fremantle, Western Australia, presented the flag of Fremantle to Captain Alex Cornelissen of the Farley Mowat. The flags of both Fremantle and of Casey will be flown when the Sea Shepherd ships return to the Antarctic Whale Sanctuary in December 2007 to once again defend the whales from Japanese poachers.

Sea Shepherd would like to acknowledge and to thank the Bunurong People also for this honor.

The City of Casey lies within the boundary of the Mayone Bulluk Bunurong.

The Bunurong People are indigenous people from Southeast Victoria, their traditional lands are from the Werribee River in the Northwest, down to Wilson's Promontory in the Southeast, taking in the catchments of the old Carrum swamp, Tarwin River, and Westernport Bay, and including Mornington Peninsula, French, and Phillip Islands.
Bunurong People were part of a language group or nation known as Kulin. Bunurong People prefer to be described as Kulin or Bunurong rather than Koorie, which is a word from another Aboriginal language. The Bunurong People were made up of a number of Clans or Family groups.

Click here to see where Casey is on a map.

On March 2nd, our supporters in Melbourne welcomed us back with a benefit concert at the Noise Bar in Brunswick.

The Sea Shepherd crew attended for a night of music and fun that raised funds for Sea Shepherd and gave the crew an opportunity to meet and mingle with Australian supporters.

The musical presentations by Loren, Deya Dova, and Mihirangi were inspirational, and the audience was treated to video footage of the recent confrontations to protect the whales in the Antarctic Whale Sanctuary.

The only complaint about Loren was that he did not have more time available in his opening act. Everyone loved him. Deva Dova was incredible and her performance was beautiful. Mihirangi headlined the event and her powerful voice and magnificent instrumentation made for a great show.

Captain Paul Watson joined Mihirangi on stage to participate in one of her unique musical creations. Captain Alex Cornelissen and Emily Hunter also made presentations. The scrumptious food was generously provided by Lentil As Anything.

It was a marvelous night and all the Sea Shepherd crew were enjoyed their return to Melbourne where the ships will be prepared for a return at the end of this year to once again defend the Antarctic Whale Sanctuary from the illegal poaching of whales by the Japanese whaling fleet.

Sea Shepherd would like to thank all the musicians and their support staff, Simon from the Noise Bar, Lentil As Anything, and all the Sea Shepherd volunteers and everyone who helped to put on this event.