Dr. Giam is also a representative of an Australian based entity called SMS (Species Management Specialists). They produce an “Influential Voting Guide” for the CITES Conference of Parties Meetings. The next meeting is March 2013 in Bangkok, where the nominated species are reviewed and protection awarded or status changed. The last meeting was in Doha 2010 and the outcome for sharks and Bluefin tuna was negative. We believe the Voting Guide looks remarkably like an official CITES-produced document. It’s a very clever piece of propaganda, especially when you realize the man behind it is Glenn Inwood, the same PR guy for the Japanese whalers.

“Thank you for your message. Following our email to you of 22 July indicating that we would be taking steps to prevent any misuse of the CITES logo, we issued Notification to the Parties No. 2012/056 restricting the right to use the logo in relation to the 16th meeting of the Conference of the Parties.” 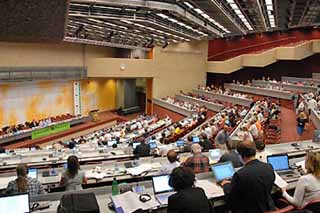 The CITES standing committee. Photo: CITESHopefully that should help with the illusion of confusion that SMS has been counting on to steer the voting at these key meetings.

Now the really good news… . The reason why Dr. Giam and possibly others like him have been able to infiltrate CITES and pervert the institution established to prevent species being traded to extinction, is the lack of any CONFLICT OF INTEREST provisos. Unlike almost every other United Nations body, CITES does not have these provisos. When Mr. John Scanlon took over as Secretary General, he put forward a proposal to have them added but it was unanimously voted down. Is it any wonder why?

In August 2011, the Chairman for the Animals Committee announced at the 61st Meeting of the Standing Committee that these provisos were not needed, “as there has never been a case of conflict of interest within the scientific committees!” Clearly, he had not seen the report that CITES received in July 2011.

We wrote to the Chairman and asked if he had knowledge of the report when he made that statement. If he did, then his integrity would be in question! If he didn’t, then what would he do to correct it at the 62nd Meeting of the Standing Committee in July 2012?  I received a letter from him, thankfully stating that the first time he saw the report was in March 2012 when Captain Watson sent it to everyone. I asked if he’d be prepared to rectify his statement at the 61st Meeting?  I have heard nothing from him directly, however I have just received this statement from the CITES Secretariat:

At its 62nd meeting (Geneva, July 2012), the Standing Committee decided the following:

The Committee also agreed with a proposal from the Chair of the Animals Committee that the Standing Committee reconsider its implementation of Decision 15.9 at its 63rd meeting (SC63) on the basis of a document to be prepared by the Secretariat.

Decision 15.9 on "Rules of Procedure of the Animals and Plants Committees" can be viewed here

So, we now wait to see what happens at the 63rd Meeting on March 2013.  If they decide to go to a vote, the result will be announced at the CoP16 in Bangkok later that same month.

The system may be broken, however the CITES Secretariat is working to fix it and for that we must be hopeful for a positive outcome.  Our aim is for the CITES Appendices to be based on science.

The first and most important step is clearing away the corruption and help the CITES Secretariat re-establish an organization with integrity.  Then the scientists can secure the threatened species the protected status they deserve!  Once gained, the snowball effect will be devastating for the shark fin industry and a victory for the sharks, our oceans and inevitably for all of us.