Challenging Death on the Beaches of Namibia

As a result, the seal clubbers were told to stay away from the beach, and the killing was delayed. However, that respite only lasted for five days. During this time, our rented house was raided by burglars, despite the fact that a female crewmember was inside the house at the time. She managed to flee, but later returned with other crewmembers to find broken cameras and missing passports, laptops, and money. A gang of sealers at Henties Bay also assaulted some of our crew, including campaign leader Steve Roest. Steve came out of a store to find another crewmember surrounded by a group of angry men yelling in her face. She managed to keep her cool as Steve calmly got into the car and they both drove away to safety. 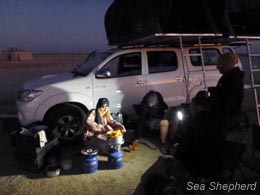 Crewmembers prepare for mission in the cover of the nightOur cover was blown and we were forced to do a feigned retreat, and for that to look credible I had to leave the country. I did so with the Namibian secret police tailing me through the desert to the airport in Windhoek, while the rest of the crew scattered into pre-arranged groups to continue the mission.

This was my first visit to the Cape fur seal colony in Namibia where the international seal skin trader, Hatem Yavuz, an Australian resident and Turkish citizen, operates what is now the largest slaughter of seals on the planet, killing more than 90,000 seals each year.

It was a wonderful experience to be amongst so many pinnipeds and in the largest seal rookery that I have ever seen. The seal pups were adorable, and the social inter-relationships between the mother seals and their pups was fascinating. But, watching the baby seals playfully frolicking with each other while I knew they would be viciously clubbed within days was heartbreaking. The Namibian tourist industry knows this too, as Cape Cross is not only a seal reserve, it is ironically one of the major tourist attractions in Namibia and brings in far more revenue to the coastal communities than the seal slaughter.

However, the problem remains that this is not primarily a tourist destination, but instead the site of mass slaughter. The seal clubbers smash the skulls of pups in the early morning hours, and immediately after they finish the gruesome work, a bulldozer drives onto the beach and covers the freshly bloodied sand.  Only then, with the truth literally and figuratively buried in the sand, are the tourists allowed into the reserve to observe the ‘beautiful and peaceful spectacle of the Cape fur seals in their natural habitat.’

So why does this go on? Because people like Hatem Yavuz manage to keep sealing concessions in Namibia through bribes to government officials and police. This entire hunt is illegal and survives only because of blatant corruption involving Namibian politicians, bureaucrats, police, and now, the military.

After I left Namibia in early July, Sea Shepherd team leaders Steve Roest of the United Kingdom, and Laurens de Groot of the Netherlands, regrouped to implement their plan to cross 15 kilometers of open desert to the seal colony on the beach. Their objective was to plant cameras and thus remotely document the brutality of the Namibian sealers. Laurens led a team including an Australian, several South Africans, and a local Namibian scout. A second, back-up team included several Americans, one Australian, and two South African citizens. 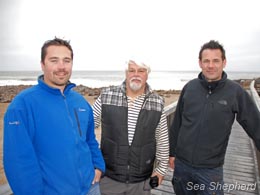 The crew dug themselves into the sand on the beach, inside lined sleeping bags to protect them from the cold – it wasn’t pleasant. One of our crewmembers was in a hole shooting footage of the sealers as they drove in the dark toward the seal colony, when he turned to see a black fat-tail scorpion with its stinger raised and ready to strike. Almost face-to-face with the scorpion, he rolled out of the hole until the arthropod scurried away. He was unaware that black fat-tailed scorpions can spit their venom. As unpleasant as it all was, the team managed to secure their positions in the dark with a good view of the killing ground.

It was a good plan, but ultimately, Sea Shepherd is no match for the Namibian military. Our crew was detected using thermal imaging from offshore naval patrol boats, and soldiers were dispatched in the direction of our operatives on the beach. Using night vision equipment, Sea Shepherd volunteers could see the soldiers approaching them and could tell that the soldiers were also equipped with their own night vision equipment. 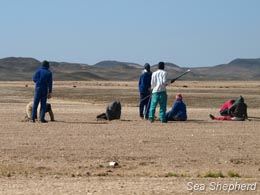 Seal clubbers taking a breakIt was a long and exhausting run back through the desert to the vehicles. At one point, one of the crew was lost when he took shelter in a salt mine to avoid detection. He did manage to struggle back to the rest of the crew, and just as they turned onto the highway, they saw police cars racing towards them. The cars passed, intent upon getting to the beach to cut off the escape of our crew. The Sea Shepherd team then took to the hills driving vehicles without lights, while using night vision to avoid boulders, dunes, and cliffs, until they safely reached the South African border. It was a dangerous, harrowing, and uncomfortable ride, but they managed to reach the South African border without being caught.

And they did so just in time! The President of Namibia was incensed; this was no longer just simple trespassing. President Hifikepunye Pohamba declared us to be a threat to national security and said that the seals needed to be killed to prevent them from eating Namibia’s fish. Thus ended our first investigative journey to the bloody beaches of Nam.

Why is Sea Shepherd getting involved now? Because after years of battling the horrific slaughter of seals in Canada, we have finally seen the collapse of the market for Canadian seal products. Although the Canadian Department of Fisheries still increases their quota annually, this year to about 468,000 seals, the actual recent kill was only around 58,000, thus elevating Namibia to the number one position as the largest seal-killing nation on the planet. And once Sea Shepherd begins a project, we stick with it until the mission is accomplished. Our objective of destroying the market for Canadian seal products has been achieved, and now we will focus our energy towards stopping Namibia. 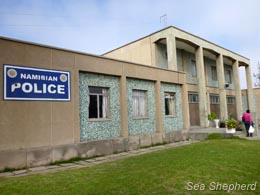 Police station in NamibiaIt will not be easy. Much like Canada, Namibia has made it a crime for civilians to document the atrocities on the beach in order to keep the killing under-the-radar. But unlike Canada, instead of fines and a minor beating by police, Namibia threatens potential violators with heavy jail sentences (and the potential of significant, life-threatening beatings). It is a highly dangerous environment, far more so than heaving ice floes and pursuit by the Canadian Coast Guard. In Namibia, it is just plain brutal thuggery employed in defense of the slaughter. The Namibian sealers make the Newfoundland and Magdalen Island sealers look like peaceful hippies in comparison, and unlike in Canada, the corruption in Namibia is blatant. The government, the police, and the military are for sale and everyone knows it.

This kind of brutal opposition requires a far different strategy than in Canada, and our objective is documentation, exposure, and utilizing this evidence to create economic pressure. We need to target tourism, especially from Germany. We need to spread the images of Namibian brutality around the world. We need to point the international spotlight of condemnation on the small group of greedy non-Namibian citizens who are profiting at the expense of innocent Namibian citizens as well as marine life.

Namibia has incredible potential as a tourist Mecca, and a healthy seal population is a surefire tourist magnet. However, the seal populations are falling, and the size of the colony has been already been drastically reduced. What was once magnificent is now much less so, and diminishes every year. Soon, there will be only a handful of seals, tourist interest will wane, and with it the huge tourism revenues that benefit so many hardworking Namibians.

Sea Shepherd is now entrenched in the struggle to end this despicable and illegal slaughter of seals. We have entered this fray dramatically and aggressively, and we will continue with an aggressive and bold campaign until we reach our goal of abolishing the crimes of Yavuz and the corrupt politicians he bribes to reap his profits from the spilled blood of hundreds of thousands of defenseless and innocent seal pups. 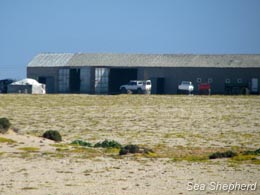