Celebrities Rally to Oppose the Slaughter of Seals

Celebrities Rally to Oppose the Slaughter of Seals 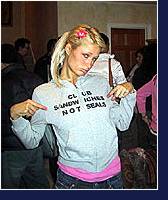 Paris Hilton has become the latest celebrity to join the campaign to oppose the cruel and wasteful annual slaughter of harp and hood seals on the East Coast of Canada.

Paris wore an anti-sealing T-shirt to the Sundance Film Festival and called for Canada to end the largest marine mammal slaughter in the world.

Martin Sheen has already taped Public Service Announcements (PSA's) for the Sea Shepherd Conservation Society. One of these PSA's is presently featured on the Sea Shepherd website at www.seashepherd.org

"In our modern media culture, celebrities have a great influence on society and politics. We did not make these rules - the media did. But it is important that we take advantage of this reality and the more celebrities speak out against the slaughter of wildlife on this planet, the better it will be for these persecuted creatures." said Captain Paul Watson.

Captain Watson has taken celebrities to the ice in the past and each time it resulted in far more media coverage than campaigns without celebrities. In 1977, Captain Watson worked with Brigitte Bardot to reach the seal hunt where she posed on the ice with the seals, guaranteeing her the cover of Paris Match, Bunte and a host of international magazines. In 1975, Captain Watson and Martin Sheen were both physically attacked by an enraged mob of sealers in the Magdalen Islands. The presence of Martin Sheen resulted in worldwide media coverage.

Tina Fagan of the Canadian Sealing Association has ridiculed the participation of actors and other celebrities on the campaigns to oppose sealing.

According to Captain Watson, "This reflects Tina Fagan's lack of understanding for what media is and how media shapes and directs Western culture. We have famous people championing a humane cause to stop the cruel and vicious killing of seals on the ice and she can only counter this with images of her blood smeared seal clubbers torturing baby seals with a pathetic defense that the seals eat fish and should be destroyed. It is a classic visual story of the forces protecting life speaking in the familiar voices of celebrities verses the forces that are intent upon the destruction of life reacting in an arrogant manner and speaking like strange thugs and hooligans."

The Sea Shepherd Conservation Society ship Farley Mowat is presently under-going final preparations for departure from the Pacific Northwest for the long voyage to the coast of Labrador to oppose the seal slaughter. The ship and crew are expected to arrive in mid-March 2004.

Canada has authorized a kill quota of 350,000 seals for 2004, making the Canadian seal hunt the largest mass slaughter of a marine mammal species on the planet.