Sea Shepherd President and Founder Captain Paul Watson arrived in Quito, Ecuador, on July 2nd, 2007, following a recent declaration by the President of Ecuador who announced a State of Emergency for the Galapagos Islands. Captain Watson's Ecuador agenda called for meetings with the following people in order to discuss strategies related to the protection and conservation of the Galapagos Marine Reserve: Vice President of Ecuador Lenin Moreno; Minister Of Interior Gustavo Larrea; Minister of Foreign Affairs Maria Fernanda Espinoza; Minister Of Environment Ana Alban; Chief Commander of the National Police General Bolivar Cisneros, Commander of the Environmental Police Colonel Teresa Carranza, and other high level officials. 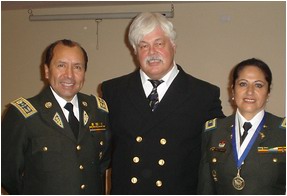 During these meetings, it was revealed that Captain Watson would be receiving awards for his lifelong dedication to the protection of marine wildlife around the world and for his efforts over the last seven years in the Galapagos Islands. The first award was presented by General Director Gustavo Paez of AMAZNOR, a grassroots organization dedicated to the protection of pink dolphins and manatees in the Amazon region. The second award was the Amazon Peace Prize and Captain Watson was selected for the awarded by Vice President Lenin Moreno and Secretary General Dr. Juan de Dios Parra of the Latin American Association for Human Rights. The Amazon Peace Prize is a medal and a plaque, and was presented to Captain Watson at a special ceremony in Quito by General Cisneros (pictured above).

In his acceptance speech to an audience of police, diplomats, media, environmentalists, and human rights activists, Captain Watson called for Ecuador to be a model for the rest of the world on upholding laws to protect the environment saying, "We now have a government in Ecuador with the will to uphold laws to protect the environment, and we must do everything in our power to uphold those laws protecting both the Galapagos and the Amazon. We can make the Ecuadorian effort a model of conservation for the world to notice and to emulate. A non-governmental organization partnered with government and policing authorities can make these changes with the passion of activists prodding the machinery of government to act with the authority of the police. It is a trinity of alliances that can and must make a difference."

When at the podium, Captain Watson invited Sea Shepherd Galapagos Director Sean O'Hearn Gimenez to come up and speak, and he introduced Sean with the following words:

"Sean has been our voice, our organizer, and our ‘face' in the Galapagos since we first arrived in the Enchanted Islands. Most of our achievements have come about because he was at the helm of the investigations, the patrols, and the initiatives. I may have brought Sea Shepherd to the Galapagos, but it is Sean who has planted our flag here and who has valiantly stood his ground in the face of power, corruption, criminal violence, and bureaucratic obstacles. We are proud to have him as our director in Ecuador."

Sea Shepherd has been instrumental in the protection of the Galapagos Marine Reserve over the last seven years with the donation of a 95-foot patrol boat to the Galapagos National Park in the year 2000. Sea Shepherd was first to respond to the Jessica oil spill in 2001 and the joint patrols between Sea Shepherd and the National Park have provided great results including the confiscation of over 5,000 shark fins and the first-ever seizure of a poaching vessel for environmental crimes committed within the marine reserve.

O'Hearn Gimenez comments, "It has been a great week as we celebrate Sea Shepherd's work in the Galapagos Islands and around the world. I have been inspired, like many others, by the prolific work of Paul Watson and it was an honor to witness the recognition of this extraordinary pioneer in the environmental movement."

Captain Paul Watson Presenting the Sea Shepherd Medal for Courage and Service
to Colonel Teresa Carranza, Commander of the Environmental Police of Ecuador
(in the back row, right side: Sean O'Hearn-Gimenez)

At the ceremonies, Sea Shepherd presented an award as well. Commander of the Environmental Police Colonel Teresa Carranza received the Sea Shepherd Medal of Valor for her courageous efforts to protect marine wildlife in the month of June. Thanks to her efforts, Sea Shepherd was able to work with operatives of the Environmental Police which resulted in a seizure of over 93,000 sea cucumbers, 19,000 shark fins, and 5 arrests. The total street value was an estimated USD$400,000.

Click here to learn more about Sea Shepherd in the Galapagos!