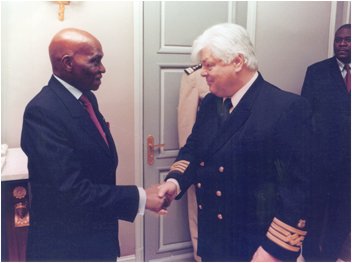 Captain Paul Watson and his wife Allison met with Senegalese President Maître Abdoulaye Wade at the Presidential Palace in Dakar, Senegal, on January 5, 2005.

President Wade had contacted Captain Watson after reading an article in the French magazine Le Monde that was published in July 2004.

Responding to the invitation, Captain Watson and Alllison arrived in Dakar on January 3.

President Wade and Captain Watson discussed the problem of diminished fisheries off the Senegalese coast where offshore foreign fishing vessels have been severely poaching fish.

President Wade has requested that the Sea Shepherd Conservation Society prepare a proposal to help address this problem in cooperation with the government of Senegal.

Captain Watson will be meeting with the Senegalese Ministry of the Environment on January 6 to review the problems that threaten offshore fish populations.

Captain Watson will be departing Senegal on January 7.

He will be giving a presentation in Paris, France, before returning to the United States on January 9.