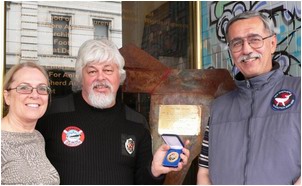 Founder and President of Sea Shepherd Captain Paul Watson has been awarded the prestigious Kindness Trust Gold Medal for Humanitarian Service for 2007. The award was presented by Phil and Trix Wollen of the Winsome Constance Kindness Trust.

In presenting the medal to Captain Paul Watson at Kindness House in Melbourne, Phil Wollen said:

"The Kindness Trust Medal was born out of a strange paradox. Every profession recognizes annually the superlative performance of one of their own. The animal rights and welfare world is an exception. There are few opportunities for truly great people to be recognized by their peers. The reason may be that their constituents, the animals, aren't able to say "thank you". . . . . in a language we humans would understand anyway.

We seek to redress the situation by speaking on behalf of the animals.

Therefore, we honour individuals whose exemplary efforts over long periods of time in difficult environments have inspired us to greater heights.

And now, one who has inspired a new generation to look to the oceans. . . . . . . where the abuse to ocean animals is every bit as obscene as those inflicted on land animals . . . . but their plight has been unreported, unrecognized, and indeed, unacknowledged.

Sea Shepherd, the organization you founded, is rare in its understanding that all animals, not just the land animals who were put on Noah's Ark, are entitled to our care, protection and respect.

That is a legacy with profound implications for this planet and one that should make you proud . . . . . and give us hope."

Phil Wollen, a former investment banker, supports over 250 charitable organizations around the world. This month, he was given the honour of being named Australian of the Year by the State of Victoria.

The Winsome Kindness Trust has assisted so many animal charities around the world, saving tens of thousands of lives and giving help to places where it is difficult to raise the funding required to truly make a difference in this world. Phil and Trix Wollen understand that strength lies in diversity and that hope lies in the passionate compassion of individuals working on the ground, in the forest, in the cities, and upon the seas. Recognition from such devoted kindness activists is truly an honour, and I accept this medal on behalf of the thousands of volunteers from dozens of nations that have crewed the decks of Sea Shepherd ships for thirty years."