Captain Paul Watson Reports from the Galapagos for May 2004

Captain Paul Watson Reports from the Galapagos for May 2004

Both of our ships, the Farley Mowat and the Sirenian are presently in the Galapagos.

The Sirenian has done an excellent job patrolling the Galapagos Marine Reserve for the last four years and the Director of the National Park, Edwin Naula has requested that the Sea Shepherd Conservation Society consider extending our five-year contract to keep the Sirenian in the islands indefinitely.

The Director also requested that the Farley Mowat remain in the Galapagos for the month of June.

There is presently a crisis situation in the Marine Reserve. Earlier in May, local fishermen had threatened to burn the offices of the National Park and the Darwin Research Station and to kidnap and kill giant tortoises unless they were given a large quota of sea-cucumbers. The Park had recommended a zero quota because the species has been severely over-exploited.

Because it is an election year, the government capitulated to the fishermen and gave them a quota of four million sea cucumbers.

Despite this, we are making a difference in the Galapagos. This month we delivered tons of equipment for a humane spay and neuter program for dogs and cats on Isabela Island.

We have also been assisting the rangers on patrol and conducting a bird mortality study on the twenty-mile highway between the town of Puerto Ayora and the Baltra Island airport. Our study demonstrates that between 100 and 200 birds are killed each day by speeding cars. We are meeting with the Ecuadorian environmental police to recommend the construction of speed bumps in the areas where the bird mortality is greatest. 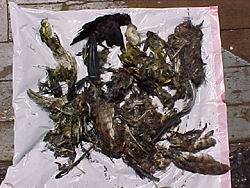 We also delivered a brand new donated four stroke 200 H.P. outboard to be lent by Sea Shepherd to the Environmental Police to enable them to assist the rangers in enforcing laws in the Marine Reserve. 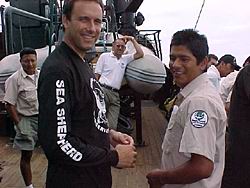 During the last few days, our small boats have been assisting the Ecuadorian Navy in the search for a Naval officer who fell off a ship during a party. Although there is only a slim chance of finding his body, we felt that it would be a good thing to assist the Navy and hopefully this might help mend fences.

Our relationship with the Ecuadorian Navy has been hostile ever since 2001 when we documented an Ecuadorian Admiral accepting a bribe to release a poaching vessel in the Marine Reserve. The Admiral was dismissed from the service and the Navy has been hostile ever since. We are hoping to repair this rift with the Navy but we will remain loyal to the integrity of our mission in opposing illegal exploitation regardless of who is involved.

This month, five poaching vessels were seized and thousands of shark fins were confiscated by Galapagos Park rangers.

Our crew of volunteers backed up by contributions from Sea Shepherd supporters is making a big difference in these islands.

This week, 120 school children from Santa Cruz island will be touring the Farley Mowat in Admiralty Bay. The crew have set up an educational exhibit of confiscated long lines on the deck for this tour.

The Galapagos is our line in the sand. If humanity cannot protect such a unique and diverse eco-system, we will not be able to protect any eco-system. The Galapagos is a challenge and battlefield for the effort to halt human greed and destruction.

The Sea Shepherd Conservation Society is seeking funding to further our important work of protecting the Galapagos National Park Marine Reserve. This is a World Heritage Site and this means all of us have a responsibility to help protect it from illegal exploitation.