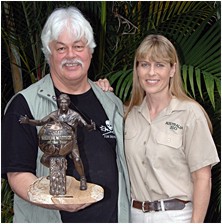 The award was to recognize organizations and individuals, true heroes and Wildlife Warriors, who have contributed significantly to Steve Irwin's legacy and helping to keep Steve's dreams alive.

Terri said honoring Paul as a Wildlife Warrior was a fitting choice as he too is incredibly passionate about protecting whales, which was something Steve was so passionate about.

"Paul is a Wildlife Warrior in every sense of the word. He puts his life on the line to defend the ocean's great mammals and in doing so, has saved 500 whales. What an effort. I know Steve would be so proud," Terri said.
Terri also honored long standing Member for Glasshouse, Carolyn Male MP for her ongoing support of Australia Zoo's conservation projects.