The Sea Shepherd Conservation Society considers Cocos Island to be one of the most treasured marine eco-systems in the world. The Society would like to resume where we were forced to leave off in 2002, with a cooperative effort between Sea Shepherd and Costa Rica to work together to defend, protect, and conserve the ecological integrity of Cocos Island National Park. 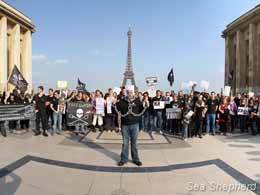 Sea Shepherd supporters gather in Paris, France for S.O.S. Day“If Costa Rica believes that there is a need to put me on trial over the absurd accusations of these fishermen we caught poaching sharks then I am prepared to cooperate with the judicial system to present our video evidence, our logbooks, and our crew as witnesses to those events. Costa Rica needs only to assign a date for a trial and I will appear before the Costa Rican Court voluntarily, if given assurances that my safety will be guaranteed. There is no need for an extradition. All Costa Rica needs to do is make a request to appear.”  Said Captain Watson.

The objective of the Sea Shepherd Conservation Society is to work with Costa Rica to defend sharks and other marine species. Captain Watson believes that this situation offers some very positive opportunities to reestablish Sea Shepherd as a cooperative partner with the rangers of Cocos Island.

Captain Watson is deeply touched by the enormous demonstrations of support from all over the world. “More and more people are becoming concerned and involved with the protection of life in the ocean and it is very encouraging to see so many people rally to this cause” he said from Frankfurt where he remains restricted to Germany for the time being.

Click here to see the article and video from the Costa Rican media.