The Irish government has announced their support for the total European Union trade ban on seal products from Canada and South Africa with no loopholes and no exemptions.

This is an incredible blow to Newfoundland sealing interests, because the Newfoundland population is largely of Irish descent. 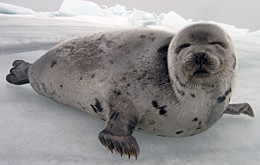 Thanks for this goes to the Irish Animal Rights Action Network (ARAN). ARAN sent out an urgent alert asking Irish citizens to politely write, email and call the Irish Environment Minister John Gormley to urge him not to support anything but a total EU trade ban on seal products from Canada-their original stance was going to be half way, which would have been filled with loopholes and exemptions-making no difference, but instead allowing the trade to continue.

The response from Irish citizens was overwhelming. The phone calls and emails from 9 AM on Monday, March 16th to the Minister's office made a huge difference and according to the Minister it influenced him to change his mind and vote for the entire bill without exemptions or loopholes.

Respect for Animals and Humane Society International sent out a similar email alert to their members and supporters along with a full page advertisement in the Irish Independent, which called on the Irish government to stand tough and support a total EU trade ban on seal products from Canada with no exemptions.

Please send an e-mail to Environment Minister John Gormley's office to wish him a Happy St. Patrick's Day and thank him for making the humane and ecologically correct decision to ban seal products. His e-mail is minister@environ.ie.

St. Paddy may have driven the snakes out of Ireland (not that this was a good thing) but John Gormley has done St. Paddy one better by driving the cruel barbarism of sealing out of Ireland and hopefully out of all of Europe.

Bless the Irish on the day and every day after.