Canada - the Errand Boy and Welfare Provider for Sealers

Canada - the Errand Boy and Welfare Provider for Sealers

Each day that the hundred Newfoundland sealing boats lay trapped by shore fast ice, is another day that harp seal pups live without the fear of the savage clubs of the six hundred sealers stranded on the floes.

The northeasterly winds continue to push the ice towards the Newfoundland shore where the vessels have been locked in solid ice for the last 10 days. The winds show no sign of letting up. 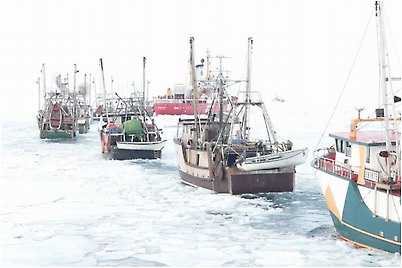 A similar situation took place in 2005, when the Sea Shepherd crew took this picture of the
Canadian Coast Guard (the red ship at the head of the line) rescuing many sealing ships
by breaking the ice and leading them out of harm's way and back to sealing grounds.

So far, fifteen of the ships have been damaged to the point where they have been abandoned with their crews flown to shore by the Coast Guard or taken onboard other boats.

The ice is moving slowly towards the shore, and if the vessels remain locked in the floes, they could be pushed onto the beach and ground up between the ice and the rocks.

It is a fate that seal lovers around the world are eagerly hoping for and it is a situation that has them rejoicing.

"The ice rules out there," said Sea Shepherd Founder and President Captain Paul Watson. "I know, I've been trapped in it myself. The Sea Shepherd ships are bigger and stronger than the sealing ships, and although we had no fear of being crushed, we have been held prisoner by the ice for over a week at a time in the past. You go where the wind and the ice take you."

As helicopter pilot Ken Steele, carrying reporters out to the ice, flew low over the boats, sealers came out on the dirty decks to wave and gesture that they need cigarettes. The ice around the boats was littered with cigarette butts. The sealers were complaining mainly that they were running short on smokes.

The rusty and dirty blood-encrusted boats with sealers standing around in blood-stained and greasy clothing, puffing on cigarettes and flicking butts onto the clean ice while the floes are stained brown with the stink of human feces from the overboard toilets is a nauseating sight.

"In my opinion, these men are addicts and thugs," said Captain Watson. "They are uneducated, filthy, brutal lowlifes who inflict the most merciless cruelties upon seal pups and then whine and snivel when they get stuck in the ice and their tobacco addiction kicks in. And here we have the Canadian Coast Guard using Canadian tax dollars to ferry cigarettes out to these sadistic morons to keep them happy. It's a bloody disgrace and it makes me ashamed to be a Canadian and even more ashamed that I'm a former Canadian Coast Guardsman."

Just beyond the horizon, safe from the trapped sealing boats, a large herd of seals lie contentedly on the ice. There the seal pups grow stronger each day and this year many of them may have a chance to survive thanks to the weather.

This year promises to be an economic disaster for many sealers but the government is committed to bailing them out. It's a glorified welfare system.

"These men say they are too proud to go on the dole," observed Captain Watson. "Yet, this seal ‘hunt' is the dole by another name. They can dress it up and make it look pretty but a government hand-out is a government hand-out and there is no escaping that. These guys are plain and simply welfare bums getting their annual kicks on the taxpayers' expense by bashing in the brains of baby seals."