This morning the Farley Mowat reported at 1030 Hours (AST), a black-and-yellow aircraft from the Department of Fisheries and Oceans Canada, radio call sign C-GGAO, circled the M/Y Farley Mowat. It made several passes. They attempted to hail the ship several times.

After a barrage of radio hails, they instructed the Farley Mowat to switch to Channel 10 on the Marine VHF and read, per verbatim, the decree of the Minister of Transport warning Sea Shepherd not to enter Canadian waters. They then took off north in the direction of Halifax.

Heavy ice is preventing most of the sealing vessels from reaching the seals. The Farley Mowat was approximately 12 hours from the ice as of 1000 Hours. 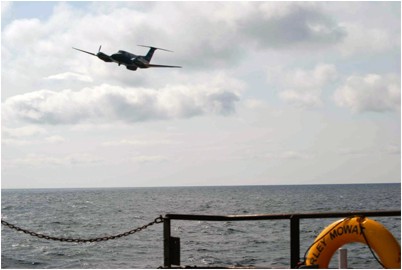