Gail Shea the Minister was pleased as punch that there were no protesters outside.

In an amazing display of insensitivity to the democratic culture she is supposed to represent, the Minister heaped praise on a society that does not allow dissent. 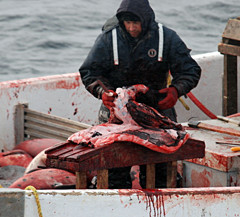 “Had this been Europe there might have been cans of red paint hurled, incendiary banners held aloft, and outraged protest,” Shea said.

“It is of course appropriate,” said Captain Watson, “that China, where human beings are brutalized, and the people of Tibet tortured if they dissent, would be a nation that would open a market for a product reaped from the sea with clubs and bullets. What Canada refers to as free trade is actually ‘trade where lack of freedom will allow it.’”

“I find it humiliating,” Captain Watson added, “that as a Canadian, my government has sunk to peddling seal pelts, meat, and seal penises. We have a Governor General and a Prime Minister gnawing on raw seal hearts with blood on their lips like little lords and ladies of the flies, and now they are shaking the hands of tyranny to peddle their obscenities to a government that has zero respect for human rights and certainly no respect for the rights or welfare of animals.”

The Sea Shepherd Conservation Society maintains that the populations of seals have been reduced to fewer than 10% of their original numbers and it is this diminishment of natural predator populations that is the second root cause for the collapse of the fisheries (the first being human greed and the mass exploitation of the fish by Canadian and European Fisheries over the last two generations).