Canada Begins Their Extermination of the Seals

Canada Begins Their Extermination of the Seals 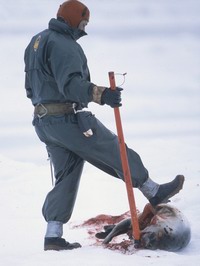 Regardless of the fact that 250,000 seal pups are estimated to have perished from diminished ice conditions in the Gulf of St. Lawrence, the Canadian Minister of Fisheries and Oceans has set the total allowable catch or quota on seal pups for 2007 at 270,000 seals.

This quota is a reduction from the quota of 320,000 seals for the 2006 season. Unfortunately, a reduction of 50,000 seals does not even begin to compensate for the drastic impact in seal populations from the mortality due to lack of ice caused by global warming.

The Canadian government is simply refusing to acknowledge global warming and climate change as having an influence on the seal populations.

"This is a grossly irresponsible decision by Fisheries Minister Loyola Hearn," said Sea Shepherd Founder and President Captain Paul Watson. "All this politician is concerned with is his popularity in his home province of Newfoundland. He is not taking into consideration the fate of the seals and he is not representing the views of Canadians outside of the province of Newfoundland."

The decision also does not take into account the fact that quotas were exceeded in 2006. There were no reprimands or penalties given for sealers who violated the quotas.

Fisheries Minister Loyola Hearn continues to flog the party line that the seal slaughter is the most "well regulated, humane hunt in the world." This is the big lie that the Department of Fisheries and Oceans (DFO) continues to promote in their effort to justify the horrific and obscene annual massacre of hundreds of thousands of defenseless seal pups on the eastern coast of Canada.

Sea Shepherd Founder and President Captain Paul Watson has been legally banned from the Gulf of St. Lawrence and the coast of Newfoundland and Labrador after being convicted of the "crime" of approaching a sealer killing a seal pup in 2005.

"It is amazing that in Canada it is illegal to witness the killing of a seal," said Captain Watson. "Canada knows that their big lie can only be sustained by keeping the truth of the slaughter away from the eyes of the public.

Sea Shepherd may return to the sealing area in 2008 despite the ban on Captain Watson. "We are moving our ship the Farley Mowat into the North Atlantic this year," said the ship's Captain Alex Cornelissen. "We cannot reach the seals this year because our ships are in Australia, but we may be able to intervene in 2008. We are researching tactic and possible strategies for future interventions."

Incompetence on the part of the Canadian DFO is the reason for the collapse of the commercial fishing industries on both the east and west coasts of Canada. DFO refuses to recognize the crucial role that seals have in maintaining balance in the sea.

"If you lower harp seal numbers, you increase the numbers of the fish that the seals prey upon," said Captain Watson. "The largest predators of valued commercial fish species like the cod and the salmon are other species of fish, the very same species targeted by the seals.

He continued, "How much more damage will DFO do before the people of Canada arrive at the realization that this governmental bureaucracy is destroying the delicate balance between prey and predator in coastal ecological ecosystems?"