The Federal Environmental Court of Porto Alegre originally dismissed Sea Shepherd's lawsuit and labeled it as without merit, basing its decision on the understanding that there was no need for the defendant to stand trial since his vessel was under charter to a third party at the moment it was flagrantly caught in the illegal act. Sea Shepherd Brazil appealed the Court's decision, arguing that the defendant still has civil responsibilities, since he obtains a profit through the charter, in addition to holding partial blame for lack of oversight in his duty to oversee the vessel.

This Wednesday the Federal Court ruled that the defendant, Mr. Henry Xavier was indeed responsible for the illegal fishing operation and was fined the equivalent of US$466,000 dollars. The boat owner was also ordered to purchase new fishing nets with turtle exclusion devices (TEDS), and offer marine conservation courses to his employees.

"This is indeed a great day for marine conservation in Brazil, one more victory in the name of the oceans, setting one more important legal precedence for Sea Shepherd Brazil to continue to fight illegal fishing practices in court and at sea," says Cristiano Pacheco, Sea Shepherd Brazil's Legal Coordinator.

Sea Shepherd Brazil has requested the court to freeze Mr. Henry Xavier's assets to ensure all fines are paid as ordered in the ruling.

"I would like to personally thank all the Sea Shepherd volunteers in Brazil that have been true to the cause and made this campaign a success. My special gratitude goes to Cristiano Pacheco who has single handedly been chasing these court cases for the past 7 years. I would also like to thank Gunther Filho and Daniel Fracasso who helped organize this and made it such a success," commented Daniel Vairo, Sea Shepherd Brazil's General Director.

Sea Shepherd has nine ongoing public civil action suits in Brazil against predatory fishing, including one against the owner of the fishing vessel responsible for killing 83 dolphins in mid 2007. "Our main objective with these lawsuits is to press the government to take action against this kind of crime which goes unpunished and to mobilize civil society over a problem that has spiraled out of control long ago in Brazil," says Pacheco.

The limit for drag-net fishing is 3.5 miles off the coast of Rio Grande do Sul, Resolution nº 26, SUDEPE. The intention of the standard is to protect the extreme fragility and importance of the coastline. The Rio Grande do Sul shores are a nursery and migratory route of hundreds of sea animals, constituting complex and delicate ecosystems.

All compensation awarded in court as a result of Sea Shepherd's lawsuits must be deposited into the State Environmental Fund coffers and used according to article 13, Law 7.347/85; mainly by federal regulators for purposes of environmental preservation and education related to fishing along the southern state's coast. 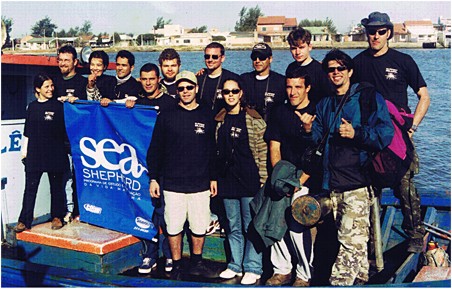