Bound for the Galapagos Islands

Bound for the Galapagos Islands 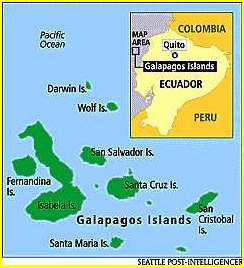 Sea Shepherd Conservation Society ship Farley Mowat under the command of Captain Paul Watson will be arriving in the Galapagos within a week. The Society intends to renew our five-year agreement with the Galapagos National Park to allow the Park to continue to utilize our patrol boat Sirenian for anti-poaching and conservation enforcement work.

The last five years have seen great changes at the Park - some bad and some good. The overthrow of the President of Ecuador earlier this year has turned things around for the better at the Park.

Recently, the Inter-Institutional Management Authority, the group charged with Galapagos management, has prohibited the use of surface longlines at depths of less than 60 meters in the Galapagos Marine Reserve.

This is good news but longlining is taking place in the Park and there is insufficient data available on the impact of longlining below 60 meters.

Last year, local groups in the Galapagos (with the support of the schools) launched the Year of the Shark to focus international attention on the diminishment of sharks populations in the Galapagos. There continues to be a ban on the export of shark fins from Ecuador despite pressure from business interests to overturn the ban. This week, the Galapagos will burn 420 sacks of shark fins confiscated from smugglers and poachers. An Ecuadorian Customs official has been jailed. The shark fins had been destined for Hong Kong.

Another bit of good news is that the fifteen member nations of the Inter-American Tropical Tuna Commission (IATTC) have approved an international ban on shark finning in the Eastern Pacific Ocean. The shark resolution was co-sponsored by the United States, the European Union, Japan, and Nicaragua, and received vocal support from Costa Rica, Panama, Ecuador, and Mexico.

The Farley Mowat is bringing replacement parts for the main engines of the Sirenian to help renovate the vessel for another five years of service in the Galapagos National Park Marine Reserve.