Jeff Hansen, Sea Shepherd’s Australian Director stated, “Australia was once a whaling nation, however nowadays Australians are amongst the most passionate defenders of whales in the world. Sea Shepherd receives overwhelming support in Australia. We simply could not do what we do, defending the Australian Antarctic whale sanctuary, without the support of the Australian public.“

“However, the very same humpback whales that are being targeted by the Japanese whalers this summer in the Southern Ocean face a new threat in their calving grounds - Woodside's proposed gas hub in a place called James Price Point, just north of Broome, stated Mr. Hansen.”

This area is the biggest humpback nursery in the world. So much so, that since 1 July this year, i.e. just 17 days, 259 whales have already been recorded by scientific survey just a few kilometers south of James Price Point and 23 calf and cow (mother and baby) pairs have been sighted already, with over 70% found within 5 kilometers of the coast.

Earlier today at a press conference with Sea Shepherd, Greens Senator Rachel Siewert said "As new national polling shows the majority of Australians do not want a gas hub at James Price Point in the Kimberley, I welcome Sea Shepherd joining this campaign and look forward to the Steve Irwin's arrival in the Kimberley."

So there you have it, the Goolarabooloo people, the majority of the people of Broome and now Australia wide, and certainly the whales, do not want this gas hub.

Bob Brown said today at the campaign launch, “There are alternative sites for Woodside's factory, but not for the whale nursery there - or the living Indigenous culture, including the songline-linked dinosaur tracks, 130 million years old, on the shoreline of James Price Point. 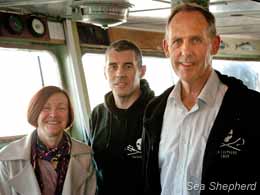 Sea Shepherd Australia Director Jeff Hansen (center) with Greens Senator Rachel Siewert and Operation Kimberley Miinimbi campaign leader Bob Brown. Photo: Fair Projects“There are other, better options for where this major gas development could go.  We know that a number of Woodside’s partners would also prefer it go elsewhere. In my talks with Shell, it, for one, is happy to move the project.  I have written to the Woodside Board, and will ask them to consider alternative sites,” Bob Brown concluded.

Sea Shepherd recently received a letter from Joseph Roe, Phillip Roe and Richard Hunter, Senior Law Bosses of the Goolarabooloo people, whose country the proposed gas hub would be built upon.  An extract of this letter, inviting Sea Shepherd to visit the Kimberley and support the campaign, is included here below:

"The Goolarabooloo People along with our friends from around the world are fighting to save this Country from destruction. Our Sea Country here is the home of the Humpback whale. We have seen the work you have done to protect the whales in the Southern Ocean. We would appreciate any support you can give us to protect the Humpback in our Sea Country from the proposal to build an industrial port at James Price Point for LNG export." -- Senior Law Bosses, Joseph Roe, Phillip Roe and Richard Hunter.

Sea Shepherd Captain Paul Watson, still under house arrest in Germany, responded with his letter below, stating "Thank you for your invitation that we accept in the spirit of eternal friendship with a promise to stand in unity with the Goolarabooloo to defend the beauty and sacredness of this wondrous environment."

The Steve Irwin will depart Seaworks, Williamstown this Saturday to arrive in Broome on Saturday, 4 August, where a number of local and international media, VIPs, musicians and business people will board for a voyage to James Price Point, as a vigil to draw attention to the prolific calving that goes on at the proposed site region.

Sea Shepherd is also inviting federal Minister for the Environment Hon Tony Burke and Shadow Environment Minister Greg Hunt, to come and see the whales, and the extraordinary Kimberley marine environment for themselves.  This is the real legacy for our children that must be protected for the benefit of all and to protect the law, culture and song cycle of the Goolarabooloo people.