This is the first time in many days that Sea Shepherd activists have seen any ship in the illegal fleet other than the Nisshin Maru—and they were quick to take action.  As the Bob Barker gave chase, they deployed a small inflatable boat which caught up with the Yushin Maru 3 and despite the whale killers’ use of water cannons and maneuvers through ice flows to try to discourage the five brave activists in the small boat, many stink bombs (made with rotten butter) successfully landed on the decks of the Yushin Maru 3.

Chuck Swift, Captain of the M/Y Bob Barker, said, “Our small boat crew did a spectacular job today.  They acted bravely and, while not posing any physical danger to anyone, sent a strong (and strong smelling) message to these whale poachers: We will not tolerate your illegal actions.”

The stink bombs, composed of butyric acid, are less acidic than vinegar or orange juice, but the smell is extremely strong and pungent—and very uncomfortable to work around.

Andrea Gordon, a US citizen voluntarily serving as Boson’s Mate on the M/Y Bob Barker, stated, “We will not allow the illegal killing of whales in our presence.  Now, even if the Yushin Maru 3 manages to move out of our range, they will have a difficult time performing their illegal work.  We feel very good about that.”

After their encounter with the illegal whale killer, the crew of the Bob Barker turned their attention to some illegal gill nets in the Southern Ocean Whale Sanctuary.  After carefully inspecting the buoys for proper markings—and discovering none—the crew worked until 0200 removing the buoys and confiscating the nets. 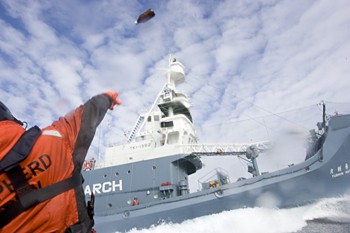 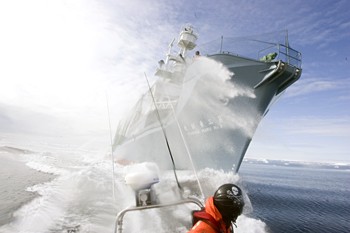