Sea Shepherd would like to recognize one of our staunchest supporters and one of the most active fighters for the seals that we know:

Bruce, who owns a resort in Belize called Jaguar Reef Lodge, has been a Sea Shepherd supporter for many years. In the late 1990's, he was very helpful when our ship, the Ocean Warrior came through Belize. The Captain and crew appreciated his hospitality and help very much.

This year, Bruce became extremely active in trying to stop Canada's mass slaughter of seals in the Gulf of St. Lawrence and the Labrador Front. He is the "poster boy" for taking personal initiative and positive action: Bruce recently commissioned 2  billboards - an example of one is shown below. 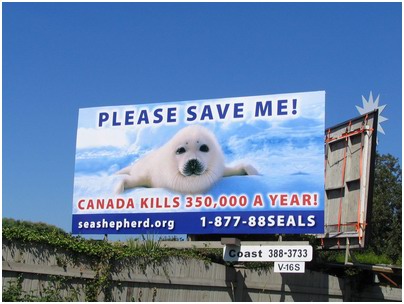 Locations - (they are illuminated until midnight every night):

Bruce would like to share some of the kudos for these billboards by giving a special thanks to Rod and Jim at Coast Advertising - "They have been terrific!" Bruce says.

His hope is that a good percentage of the 100,000 people who see these billboards each day will join him in telling their government to STOP THE ANNUAL SLAUGHTER OF SEALS.


Bruce with his billboard: 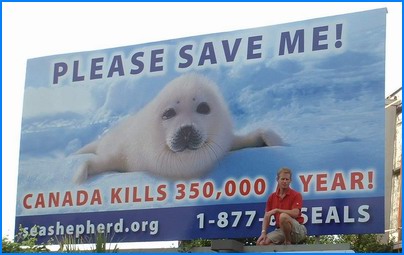 Sea Shepherd Conservation Society would like to extend a
special thanks to Bruce for not only being our friend,
but also for being a best friend to the seals.

Please click here for more information about the annual Canadian
seal slaughter and what you can do to help stop it.