Bermuda is not a nation known for protest demonstrations, but on Friday Bermudians demonstrated in force in front of a Fisheries of Japan patrol boat tied on the Hamilton harbour front.

The following is a report from Andrew Stevenson in Bermuda:

The demonstration was against the Fisheries Agency of Japan, the government-owned agency responsible for the whaling campaign in the Antarctic where over a thousand whales are being targeted for 'scientific research'. The whale meat is sold commercially.

"I saw a humpback off South Shore today, and another two yesterday. These humpbacks could be targeted for 'research' by the Fisheries Agency of Japan. Despite a moratorium on commercial whaling enacted by the International Whaling Commission in 1986, the Japanese have been hunting whales in increasing numbers. Japan has exploited a loophole that allows member states to kill whales for scientific research."

"Japan has been 'researching' whales with great effectiveness, killing more than 25,000 whales in the Southern Ocean and the North Pacific. This year the Japanese added 50 humpbacks and 50 fin whales to the 935 minke whales included in the self-imposed total number of whales to be targeted for their 'research'."

"The "Mihama" is a patrol boat belonging to the Fisheries Agency of Japan. These patrol boats are supposed to monitor Japanese long line tuna fishing fleets to ensure they are not over fishing. When the same Fisheries Agency of Japan tells us that they are killing a thousand whales annually for scientific research, they lose any semblance of credibility. How can we believe that a patrol vessel such as this actually monitors the Japanese fishing fleets? It's like setting out the fox to guard the chickens."

"We have already lost 90% of the pelagic predator fish stocks including marlin, tuna, swordfish, and the great sharks that existed before 1950. 100 million sharks are killed each year just for their fins. Their bodies are thrown overboard, often alive. Half the world's reefs are dead or dying. If the current trends of over fishing continue, every fishery will collapse by 2048."

"We need to raise our awareness of what is happening out in our oceans. The high seas are not governed by any single nation, which means the rules pertaining to marine life are often complicated and difficult if not impossible to police. Out of sight, out of mind. We can no longer remain in denial. The world's marine life is on the brink of collapse. Japanese whaling in the Antarctic Whale sanctuary is just the tip of the iceberg.

Continued plundering of our ocean environment based on greed, cultural traditions or national pride needs to become a thing of the past. Today's oceans are in great peril. If the oceans die, we die."

"This afternoon my 4-year old daughter Elsa offered the captain and crew of the Fisheries Agency of Japan patrol vessel 'Mihama' her humpback whale in token of our appreciation that the 50 humpback whales were taken off their list of targeted whales. Perhaps when a Fisheries Agency of Japan patrol vessel comes back we will be able to offer the crew a minke and fin whale."

"The captain and crew of the 'Mihama' did not accept the whale."

Photos from the Protest 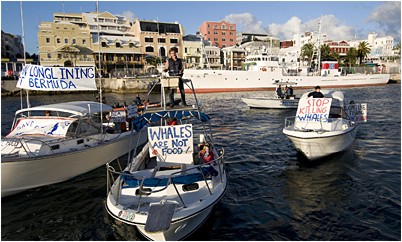 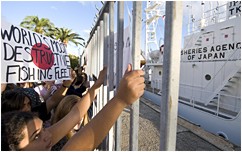 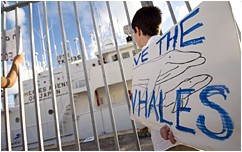 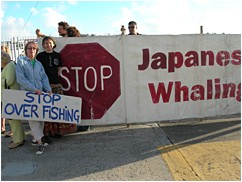 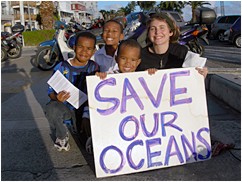 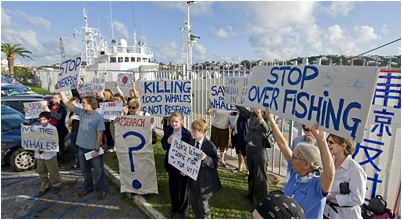