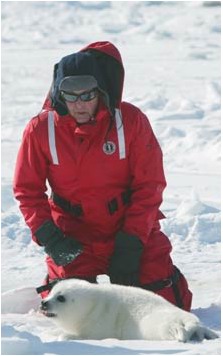 Sir Paul McCartney and Lady Heather Mills McCartney were brilliantly articulate and their defense of the seals on last night's Larry King show on CNN was an incredible boost for the campaign to end the brutally cruel slaughter of seals.

Premier Danny Williams did not have a chance. Like a deer caught in headlights, he was as helpless as a baby seal when he foolishly attempted to take on the legendary Beatle and his wife in a humiliating defense of the indefensible massacre of new born seals.

"My heart was filled with hope to hear the McCartney's defense of the seals. They knew their facts and they were not intimidated by Danny Williams, the Premier of Newfoundland," said Captain Paul Watson, the Founder and President of Sea Shepherd Conservation Society.

Premier Williams attempted to steer the argument away from the issue, but Heather put him in his place by pointing out that he was doing what most politicians do by trying to deflect the issue.

William's defense of the sealers as humane was pathetic and lost all credibility with the images shown of the seals choking and convulsing in their own blood on the ice. William's argument that the seals were shot and not clubbed was shown to be a lie by the same images and by interviews with sealers holding their clubs. Even more pathetic was William trying to say that the people who defend the seals are terrorists and are under investigation for terrorism.

The World Wildlife Fund did not win any points when Williams announced that he had their support. And the International Fund for Animal Welfare must have been outraged to hear Williams say that the sealers had the support of IFAW, which they don't and never will.

Most importantly, Paul and Heather promoted the Boycott of Canadian Seafood products and pointed out that the boycott of snow crabs from Newfoundland alone had cost the Canadian seafood industry 129 million dollars, a fact that Williams could not deny.

They specifically mentioned the boycott of Red Lobster twice, which will put considerable pressure on the restaurant chain to stop their purchase of Canadian fish. Last week, Trader Joe's joined Whole Food Market and thousands of restaurants that have signed onto the Boycott of Canadian Seafood.

Sea Shepherd designed a T-shirt with our own version of the Red Lobster logo.
Visit our online store to get yours!

Heather and Paul stayed on the issue and did not allow themselves to be distracted by Williams. Recently-elected Prime Minister Stephen Harper is most likely regretting his decision to have Williams speak for him. That decision made Harper to appear cowardly, a world leader afraid to debate a Beatle and his choice of Williams demonstrates his complete ignorance of the issue.If Williams is the best defender of the slaughter that Canada can produce then the battle for the hearts and minds of the public has been lost by Canada. They should end the seal hunt now and save some dignity.

During the interview, Williams invited Paul and Heather to Newfoundland to defend the cod which he says were wiped out by European fisheries. The fact is that it was the Canadian draggers that were responsible for the destruction of the cod, not the seals and not foreign fishermen.

When Williams said that Canada had the best scientists in the world managing the seals, Heather quickly pointed out that they were the same scientists who mismanaged the cod.

Heather knew her stuff and she was passionate about it. Paul radiated confidence and both of them strongly rejected William's insulting accusation that they were being used by those who opposed the seal hunt.

The Newfoundland Premier, Canadian politicians, and the sealers can ridicule the opinions of celebrities all they like, but the fact remains is that the public listens when celebrities speak. The international public has become very aware of the bloody, cruel, barbaric, and archaic slaughter of seals by Canadians because of outspoken celebrities who have gone to the ice - people like actors Brigitte Bardot, Martin Sheen, and Richard Dean Anderson, and author Farley Mowat, and John Paul Mitchell Systems CEO John Paul DeJoria.

Captain Watson and Sea Shepherd have brought many famous people to visit the seals over the years to help shine the international spotlight on the plight of these marine mammals in peril.
[Note: You can hover your mouse over the pictures to read the captions]

This visit to the ice by Paul and Heather has sent images of the seals around the globe. They have led a media charge that has broken the lines of the Canadian defense of this slaughter. They have invigorated and passionately motivated seal defenders around the world.

"On behalf of Sea Shepherd Conservation Society board members, staff, volunteers, and supporters, I would like to thank you both," said Captain Paul Watson. "Well done, Paul. Well done, Heather. You have made a major contribution in defense of the seals and for the cause of ending this horrific slaughter."

Learn more about how you can make a difference by joining the Boycott of Canadian Seafood.