Sea Shepherd Conservation Society is today applauding the nation of Austria for voting unanimously yesterday in support of a complete ban on the importation, processing, and distribution of all seal pelts from all species of seals.

Austria joins Belgium, the Netherlands, Germany, Italy, and Croatia in banning seal pelts. Austrian Minister for the Environment, Josef Proll (OVP), stated that he will also work for a ban on the EU level.

Despite decades of worldwide protests, the Canadian government has continued to allow the slaughter of more than a million harp seals in the last three years. In response, many countries are now introducing national bans on seal products in order to close the markets and send a clear message to Canada.

The Canadian government has wasted countless thousands of taxpayer dollars sending delegations to Europe in support of Canada's commercial seal hunt. Millions of more dollars have been spent on subsidies such as Coast Guard icebreaker assistance and providing the sealers with cigarettes and food while they are stranded on the ice by their own folly.

Yet, Europeans are listening to the facts, and the facts are that this is a cruel, unsustainable, and wasteful hunt which must be stopped, and they want no part of it. 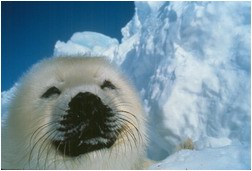 Dozens of sealing boats remain trapped in ice floes and the damages to the boats will be very costly for many of the sealers. Insurance premiums are expected to go higher than the average $20,000 presently charged for coverage.

This year, nature has joined forces with efforts to apply economic pressure against the seal hunt. The ice and wind conditions on the Eastern Coast of Newfoundland have been an ally to the seals and a nightmare to the sealers. "That's what we like to see," said Captain Alex Cornelissen, the Master of the Sea Shepherd ship Farley Mowat.

"We will defeat this obscenity," said Sea Shepherd Founder and President Captain Paul Watson. "The barbarism of sealing has no place in a decent society and no place in the 21st Century. We need to keep the pressure up on undermining the markets for seal pelts, and we need to continue to boycott Canadian products and tourism. Economics is a language the government of Canada understands and that is the language we are speaking to them in."

Click here to read the Toronto Star article suggesting the seal hunt may be on the way out.