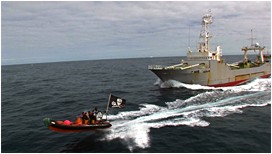 Yesterday on the official blog of the Australian Greens Senators, Tim Norton suggested that perhaps it would be more economically responsible for the Australian Government to fund Sea Shepherd in its efforts to fight against whaling, rather than its own customs vessel.

Sea Shepherd has been much more effective at intervening against Japan's illegal whaling in Australian Antarctic waters than the customs vessel Oceanic Viking, which last year monitored Japanese whaling activity, but stopped short of taking any legal action to prevent the Japanese from whaling.

Still No Action on Whaling

Senate Estimates have shown the true lack of commitment from the Rudd Government on the fight against whaling in our Antarctic waters.

Under questioning, it was confirmed that the 2008 budget held no funding for a continuation of the customs ship Oceanic Viking (or any other ship) to monitor Japanese whaling fleets in our Southern and Antarctic oceans, making one wonder just what they are doing to do about whaling into the future. Does this mean that the Government will not be undertaking monitoring of Japanese whaling activity into the future?

Not that we can count on anything actually being done about it - after monitoring the whaling operations, documenting the slaughter with pictures, video and other media, the Australian Government have evidently decided to file this away and wait for the Japanese to stop whaling on their own terms.

The Minister for Home Services has claimed success for the operation taken out by the Oceanic Viking, when not one whale has been saved through their operations to date. So far, the only ones who have had any success in preventing whales from being killed in the Australian Antarctic whale sanctuary have been the non-government organisations Greenpeace and Sea Shepherd.

Meanwhile, the Greens continue to call on the Australian Government to close the loophole in the IWC that allows the killing of whales under the name of 'scientific research' and to pursue the international legal case to stop the slaughter occurring in our Antarctic territorial waters.

The yearly migrations of humpback whales up the Australian coast are the mainstay of the whale-watching industry, and losing the species could have drastic effects on the tourism market on our southern coasts.
Humpbacks were hunted to the verge of extinction in the late nineteenth and early twentieth century, with only 3 to 5% remaining when the IWC ban was enacted in 1963. While populations off Australian waters have slowly begun to recover, the population is only a fraction of their original abundance and they are still listed as vulnerable under the EPBC Act.

The Government hasn't been prepared to take legal action to stop the whale slaughter on environmental or humanitarian grounds and the Japanese have continued to up the ante. First they procrastinate about acting on any evidence they have collected, and now it appears they may have given up entirely - therefore creating a farce out of the original expense incurred by the Oceanic Viking mission.

Perhaps it would be more economically responsible for the Government to fund Greenpeace and Sea Shepherd directly, rather than waste Customs time with useless whale watching expeditions?