A famous daughter of Aotearoa/New Zealand will be heading south in early December to help confront the most vicious whale killers in the world. Australian based Maori singer/songwriter Mihirangi who has toured the world with her music and songs has decided that she needs to do what she can to stop the cruel and illegal slaughter of whales by the Japanese whaling fleet.  The singer will join the crew of the Sea Shepherd Conservation Society's ship, Robert Hunter to intervene and defend whales from slaughter.

On November 9th Captain Paul Watson, founder and president of Sea Shepherd was led to a hui (meeting) of the Maori at Raglan, New Zealand by Mihirangi. As she approached the local meeting hall with the Karanga (call) Mihirangi was received with her guests with a response of the same by the local Kuia (Female Elder). Mihirangi led Captain Watson to the front of a gathering of people in a traditional Powhiri (welcome) where the Kaumatua (Tribal Elder) gave a mihi and whaikorero, traditional acknowledgement and formal greetings, to which Captain Watson warmly and wittily responded to much delight and gratitude of the local people. The Maori gathering had given their blessing to the Sea Shepherd Captain and crew for their up-coming voyage to the Southern Oceans to defend endangered whales from the illegal activities of the Japanese Whaling fleet.

The Maori flag will fly from the masthead of the Sea Shepherd ship Robert Hunter and Mihirangi will join the crew along with some thirty-five other volunteers from around the world. Mihirangi is an internationally acclaimed artist who has toured extensively throughout her Native Aotearoa,Australia, Europe, Canada and the United States. Mihirangi's performance was one of the highlight at the Sea Shepherd 30th Anniversary Event in Santa Monica, California where she performed for over 500 people.

"Ever since I first heard of the Sea Shepherd Conservation Society I have felt a great sense of relief that there is a committed group of people who are willing to defend Nature from the overpowering and sightless greed of those who are hell-bent on economy and not ecology. It is human character to protect that which you believe in, that which you cherish and that which you love... I love Nature and I know that we as part of the Earths bionetwork may not survive the mass extinctions that we are now facing due to the stupidity of a powerful few and the ever increasing global population.  I hope that by going on this campaign that I contribute to the survival of an intelligent and magnificent animal that plays a crucial role in the bio-diversity of the world we live in," said Mihirangi.

As a supporting member of the Sea Shepherd Conservation Society, Mihirangi has performed at several fund-raising benefits for Sea Shepherd on behalf of the whales. She is now a committed conservation activist and on the board of directors of Sea Shepherd Australia.

"I am proud to have her onboard for this campaign," said Captain Watson. "She brings a spirit to our decks that we very much welcome. The Maori have a profound respect for the whales and she represents the respect of her people for these magnificent sentient beings. Her meditative spirituality, her powerful music and solid commitment will help us to better focus on the pursuit of those that bring death and suffering to the great whales."

Mihirangi will depart on the Robert Hunter from Australia which is scheduled to set forth the first week of December bound for the waters of the Southern Oceans Whale Sanctuary. 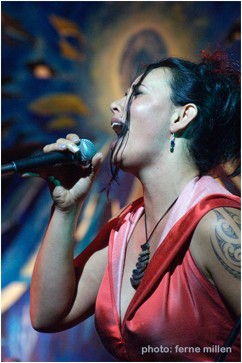 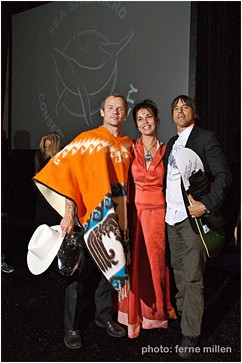