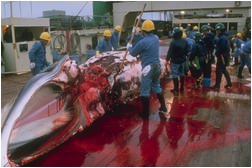 Upon hearing the news that Australia is banning  port access to Japanese whaling ships, Captain Paul Watson said that he very appreciative.

"I do have a problem with Senator Ian Campbell (Environment Minister) advising the Japanese to conduct their operations in a safe and peaceful manner," said the founder and president of Sea Shepherd Conservation Society. "Whaling is not peaceful nor is it safe to the victims. Whales are dying down here in the Antarctic Whale Sanctuary in unbelievable agony. Thousands of gallons of blood are being spilled into the sea. The violence of whaling is an obscenity and only a barbaric nation could tolerate such gross cruelty."

Click here to read the ABC News article Doors shut to Japanese whalers, says Campbell (or read the full text at the bottom of this page)

Along with the accolades, there is still criticism of Senator Campbell. Following are excerpts a January 11th Press Release from the Federal Green Party of Australia entitled: "Minister Do-little cannot point the finger over whales"

"Federal Minister for the Environment Ian Campbell's failure to intervene on Japanese whaling in Australia's Antarctic waters leaves him in no position to criticise the Sea Shepherd and its crew," Greens Leader Senator Bob Brown said today.

"Senator Campbell has condemned the Sea Shepherd but refused to send an Australian observation vessel to the Japanese killing grounds," Senator Brown said.

"This summer the Japanese are even targeting Hump Back whales which have returned from their breeding migration along the Australian coastline. The Government should send a surveillance naval vessel to record the slaughter and show the world what a terrible business killing whales is," Senator Brown said.