Environment Minister Malcolm Turnbull said Iceland's whaling program was in breach of the international moratorium on killing whales. "Australia opposes the resumption of barbaric commercial whaling by Iceland," Mr Turnbull said in a statement. "Australia is implacably opposed to commercial whaling, and we believe Iceland's actions are in breach of the moratorium upheld by the international community for 20 years."

He said Iceland had unilaterally announced it would resume commercial whaling in defiance of the moratorium.

"It has done so without any assessment by the International Whaling Commission (IWC) or its scientific committee," Mr Turnbull said. "What is particularly deplorable is that Iceland is targeting fin whales. Fin whales are listed under the IUCN (International Conservation Union) Red List of Threatened Species as endangered, which sadly means they face a very high risk of extinction in the wild in the near future."

Mr Turnbull said Iceland was a modern, prosperous economy with no need to hunt endangered whales.

Both Australia and New Zealand have pledged to take a stronger stand in opposition to illegal whaling. Captain Paul Watson, in a conversation With New Zealand Conservation Minister Chris Carter, said that Sea Shepherd would be reasonable and would back down from more aggressive confrontations with the Japanese whaling fleet this season if New Zealand agreed to take a more aggressive political stand against Japanese intentions to target humpback and fin whales in the 2007/2008 season. Minister Carter agreed. 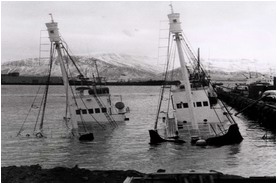