Anti-Sealing Pressure May Force the Banning of the Vicious Hakapik

Anti-Sealing Pressure May Force the Banning of the Vicious Hakapik

Every day sees more and more restaurants and hotels signing on to the Boycott of Canadian Seafood products. Europe has adopted a proposal to ban seal pelts. Canadian tourism is suffering. There is a move to discourage film-making in Canada.

A sign that this pressure is having an effect can be read in the announcement by Newfoundland Premier Danny Williams that he would like to see the vicious hakapik banned from the annual seal slaughter.

Hakapiks are clubs equipped with spikes at one end. These medieval weapons of death are the tools used to bash in the heads of seal pups.

Danny is upset about the images. "Even though it's proven to be a very effective method of killing seals, it's just the optic. It's the visual image," Williams said Wednesday. "So, one thing certainly that I'm looking at as premier of Newfoundland and Labrador is to try and make sure that we take that out completely."

The Premier of Newfoundland does not have the legal authority to issue such a ban because sealing is regulated by the federal government. The federal Department of Fisheries and Oceans is adamant that the hakapiks are humane.

Jack Troake, a veteran sealer based in the northeast Newfoundland fishing community of Twillingate, said a ban on hakapiks is worth pursuing. "It is causing a very serious problem for us," Troake said. "This is the hang-up, and I certainly believe that if they don't change that, that we're going to lose this hunt."

Williams's comments do not sit well with hunters from the Magdalen Islands. Eldridge Woodford, president of the Canadian Sealers Association, said he will talk to his board members before he comments on the issue.

A spokesperson for Premier Danny Williams said that the Premier was not concerned about the Magdalen Islands. "That's Quebec's problem." He said.

Captain Paul Watson said that he would welcome the ban on the hakapik. "However, I want to see a ban on the club and the rifle. I want to see this national obscenity abolished and the killing brought to an end. The harp seal populations have been reduced to less than 10% of their numbers before this slaughter began. This is a conservation issue also as well as a humane issue."

Click here to learn more about Sea Shepherd's efforts to save the seals. 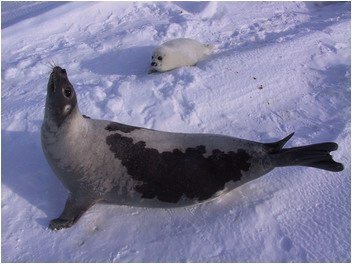