The gastronomic lust for sharkfin soup in China and in Chinese restaurants around the world is destroying worldwide shark populations at an alarming rate.

As thin rivulets of blood trickled down her back, Alice admitted that it was as painful as it looked but she added that the pain she was enduring was minor compared to the pain suffered by the tens of millions of sharks every minute of every day.

Parisians passing by were mixed in their reactions. Some were horrified and shocked, others were curious and others expressed their understanding for the sacrifice that Alice was selflessly making for the sharks. Everyone who saw her wondered why Alice was hanging from shark hooks on land so far from the sea.

This is the second occasion that Alice has been suspended with the shark hooks in her back. Last year, she initiated the LUSH and Sea Shepherd shark campaign by hanging suspended in the LUSH Fleet Street store in London. The campaign aims to raise awareness about shark finning.

I have always said that we need a diversity of approaches in both strategies and tactics to save our oceans. People need to harness their imaginations, their talents, their skills, and their passion in the cause of championing constructive change to save our Oceans and our Earth. Alice has done just that by using her experience as a performance artist to bring attention to the slaughter of the sharks.

Alice said that she was inspired by the Sundance ceremonies of the Lakota and the Cheyenne. The Sundance is a sacred dance for the renewal of life. Women are the bearers of creation and life and all that the Sundance represents.

Alice was expressing her desire for life for the sharks to replace the death that humanity is inflicting upon these great elders of the deep.

LUSH and the Sea Shepherd Conservation Society have been working together for the last few years to bring attention to ocean conservation issues, specifically sharks and the Canadian harp seal. The profits from the sale of LUSH Sharkfin Soap are used to help finance Sea Shepherd anti-poaching efforts in the Galapagos. 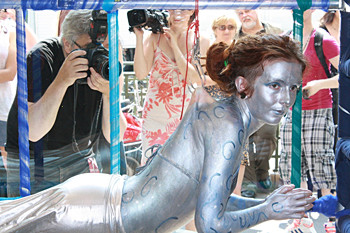