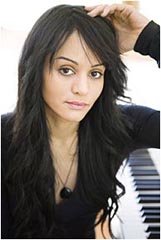 Sea Shepherd Conservation Society is very pleased to announce and welcome musician, actress, and activist Persia White to our Board of Directors. Persia joins the other five members of the Board in our efforts to uphold international marine conservation law to protect whales, dolphins, seals, and all marine wildlife.

The Sea Shepherd Society is very honoured to have Persia join our board. Her compassion for life and her concern for the environment and her passionate empathy for animals makes her a valuable member of our team. This spring, Persia joined Captain Paul Watson and French Actress Brigitte Bardot in Canada to oppose the cruel and destructive mass slaughter of harp seal pups.

Sea Shepherd has attracted unique and talented directors over the years and Persia is a unique and talented woman. Persia spent the first 3 months of her life sleeping in an old upright bass case lined with pillows and blankets. A friend of the family gave it to her mother because she couldn't afford a crib. To this day the foundation of music and art still resonate and live inside her.

Today Persia is an actress/singer/musician/songwriter/Protools engineer.  Currently she's working with her band "XEO3" on their first album, Problem Child. However, many people know her for her work on the hit TV show Girlfriends, now in its seventh season. Girlfriends is produced by Kelsey Grammer.

Recently Persia collaborated and sang on 5 songs with recording artist Tricky who also appeared on Girlfriends. Persia has also co-written with Dominique Miller, Gary Wallis of Pink Floyd, Jane Wiedlin of The Go Gos, and Jason Miller of Godhead.  Persia has written soundtrack music for three films, as well as the 2006 season finale song for Girlfriends.

Outside of Music and TV, Persia has appeared in various Independent films including, Red Letters, opposite Peter Coyote, and the cult horror Blood Dolls. She starred in the made-for-TV movies Operation Sandman, opposite Ron Perlman, and Suddenly, opposite Kirstie Alley. Her television work includes guest starring roles on, Angel, NYPD Blue, Brooklyn South, Buffy the Vampire Slayer, as well as a series regular role on Breaker High with co-star Ryan Gosling.

Persia is a human rights advocate, animal rights activist, and environmentalist. She was honoured by PETA as a 2005 Humanitarian of the Year and received and an award from Farm Sanctuary in May 2006. She is an active member of The Humane Society of The United States, Global Green, Farm Sanctuary, CCHR, and PETA. Persia is a co-producer of the award-winning documentary Earthlings narrated by Joaquin Phoenix. This film is about an awakening of consciousness and humanity.