A Whale for the Caring

Keith stated that it was now close to shore, approximately 1 kilometre south of Jurien Bay, 266km north of Perth. The humpback was sitting in about 1 to 1.5 metres of water (depending on the tide) and that it seemed fine apart from some superficial damage sustained when the whale crossed the reef. Keith also stated that a boat had recently come in with some rudder damage and the crew think they may have hit a whale. 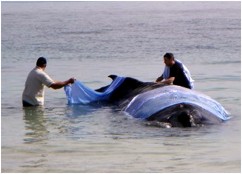 A call to was made to the other side of the country to Vanessa Pearce, who helped coordinate the rescue effort of the orphaned humpback "Collette" in Sydney only 5 weeks ago. Discussing our options, it was deemed that should this humpback be in a position to be able to return to the ocean, we might need something called a "sykes pump", easily obtained from an equipment hire shop. Sykes pumps are mainly used to free beached yachts and could be used to either provide an escape route for the humpback or to help dig out a channel around it so that it can rest on the sand without the full weight of its body. The option of building a modular pontoon around the humpback was also discussed - to aid in diagnosis and treatment. These are a number of options being added to a new database, in response to what happened to Collette.

A subsequent call was made to Keith Hockey to relay all our information and to inform him that I would be driving up the following morning to assist in any way. Keith kindly met me at the DEC office in Jurien Bay. Inside their office were pictures of successful marine rescues that had taken place in the area including cetaceans, seals and sea turtles.

I asked to see a chart of the local Jurien area so I could gauge water depths in the bay. The chart showed a safe passage back out to deeper water, and ultimately out into the ocean, if the whale was able to do so.

Up until  Saturday the weather had also been in the whale's favour - overcast and rainy, however the sun came out that morning which was not good for an exposed humpback.

Travelling along the beach approaching the site with Keith I hoped that we would find an empty beach, however this was not to be the case. DEC had staff at the site advising the public to stay clear and observe from a safe distance, in a bid to not further stress the whale.

This was by no means a juvenile. It was an 11 metre, sub-adult with an estimated weight of around 15 tonnes and was facing directly towards shore. Looking at the area between the dorsal and the fluke (peduncle), I noticed immediately that this humpback was overall in a fairly good condition with no signs of the backbone showing.

I called the only vet I know with cetacean experience willing to help, Dr Robert Zammit, and ran through the situation with him and Keith. Dr Zammit backed up the consensus that baleen whales, unlike toothed whales, only come into shore when they are ill and that the best thing to do was to try and keep the humpback as cool, calm and comfortable as possible.

Keith and I returned to the site to place some sheets over the humpback which, due to their absorbent nature, kept the humpback wet and out of the sun. This also gave me a chance to see the condition of the humpback. It appeared to have taken quite a beating with marks and scratches down to the blubber. There were also a number of flies and lice moving about.

This magnificent, intelligent being knew exactly what we were doing and lay there patiently as we carefully placed the sheets over to block out the sun. The skin felt very soft and quite warm which was not a good sign. The humpback's temperature then began to drop - a good sign as the tide began to return to further cover it. It had dug itself a trench thereby elevating the need for a skykes pump.

Further advice from Dr Zammit recommend the use of ice, should its temperature rise again, and a mixture or hydrogen peroxide 3% to disinfect the wounds.

I stayed back until dark before removing the sheets in case a wave pushed them over its blow hole. Removing the sheets it was apparent that sun blisters had resulted from the morning sun when it was not covered. This could introduce another avenue for infection.

Arriving back on Monday with another Sea Shepherd ground support volunteer, Marina, things looked promising. The humpback had changed direction and was now facing out to sea and showing a lot more movement than the previous days. It appeared as though it was starting to work the peduncle area, almost like someone doing physiotherapy to get an injured area back in working order.

There was a great deal of excitement amongst the Jurien Bay community and the DEC staff, many of whom were down there on their day off.

Doug Coughran, Senior Wildlife Officer, Marine Wildlife Operations, DEC arrived from Perth to assess the situation. I was asked to by the local DEC staff to explain to Doug that it appeared as though the humpback was showing signs of improvement. Doug has developed numerous techniques and tools for freeing ocean life from fishing nets, lines, shark nets and other human ocean rubbish over the years. His techniques have been shared around the globe and have assisted in numerous marine rescues.

Doug and a fellow DEC Officer, John, assessed the situation by performing a number of reflex tests on the whale. These involved moving the pectoral fins into positions and making contact with the tail, which in healthy humpbacks would not like. The humpback lay there motionless. After the examination and back on land Doug explained to me all about the tests performed, along with their expected responses and outcomes in this case.

A decision was made to re-assess the whale's condition in the morning. Doug had arrived on scenes in remote locations where humpbacks had been sitting in the shallows for weeks where they were slowly decaying away, yet still just barely alive.

With the sun setting, Marina and I headed back to Perth hoping that with the onset of the high tide in the morning, a miracle would result and the little humpback would set course for Antarctica, along with the rest of the Southern migration.

However the happy outcome that we all strived for and hoped was not to be. On Tuesday afternoon I was phoned by a very distraught Keith Hockey to advise that the humpback was further listing to one side and that the left side appeared to be swollen, so perhaps some internal damage had taken place. After a final assessment it was determined that the humpback's condition had deteriorated considerably. The hard decision was then made to end the whale's suffering by using a method approved by the Department's Animal Ethics Committee.

Both Keith and Doug thanked Sea Shepherd for their help and time.

In the debrief to the Jurien Bay DEC staff, Doug mentioned Sea Shepherd, stating that no other NGO's had visited the site to lend a hand. Doug also stated that he will be meeting with Sea Shepherd to see how we can assist them with future marine wildlife rescues.

Doug and his team at DEC have successfully coordinated the rescue of countless strandings and entanglements and is willing to share some of this knowledge with us. This knowledge can then be transferred down the line to our chapters around the globe, to aid as a volunteer response team.

Personally this has been a very hard write-up to do, as I am still filled with many mixed emotions and a constant ache that comes from within.  There are so many questions that are raised here, but the only action that makes any sense here is to state what I saw and what I believe is needed.

As sad as this situation is, we must stay positive and move forward.

Everywhere you look in Australia, there are veterinary clinics for domestic animals, but where is the help for our native fauna and marine wildlife?

Since the Collete incident, a side project has been in motion to assist in orphaned whales coming into our shores. The plan is to have at our finger tips a list of reputable marine biologists, vets with cetacean knowledge, scenarios, equipment, food formulas and a team of volunteers all willing to assist. The response has been overwhelming and the ideas and contacts that have come forward have been very encouraging.

Countless members of the Jurien Bay community came down, not once but several times a day hoping to see an empty beach and hoping the humpback had joined the southern migration to Antarctica. The unfortunate news is that, with the increase in humpback numbers and people's careless attitudes towards our oceans, it's only going to get worse.

It's been a very tough year for humpbacks in Australia, dodging the highway of shark nets, cray lines, boats and the outcomes have not been all good.

However with the outpouring of human emotion, it has also shown the rest of the world how dear we all hold these whales to us.

Each one that falls and touches us, lives on inside to take onto the next battle.

When the Japanese whaling fleet head down to the Southern Ocean Whale Sanctuary this summer, the iconic MY Steve Irwin of the Sea Shepherd Conservation Society will be there - and all of Australia will be watching! 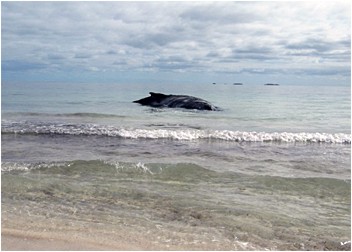 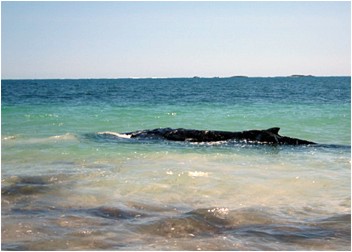 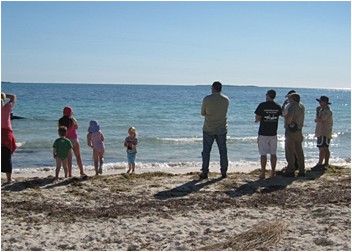 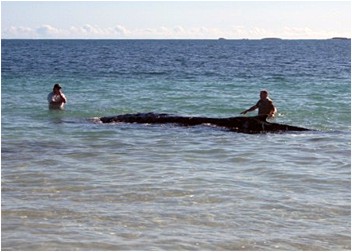 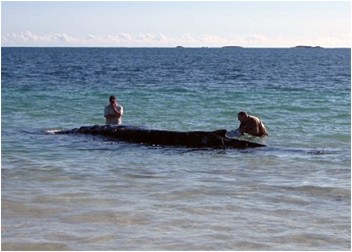 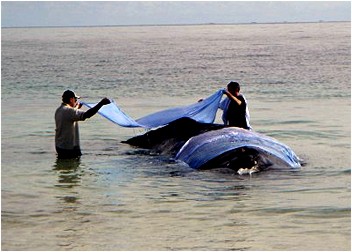 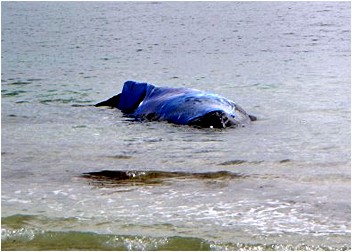 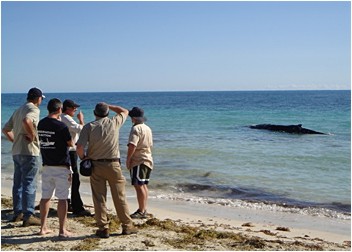 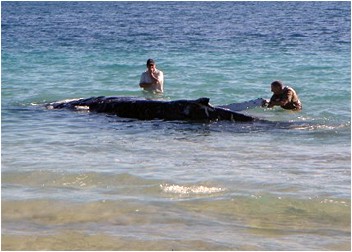 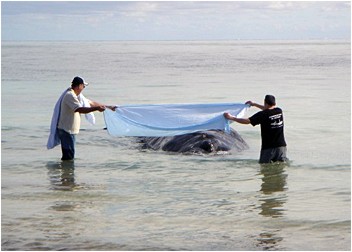